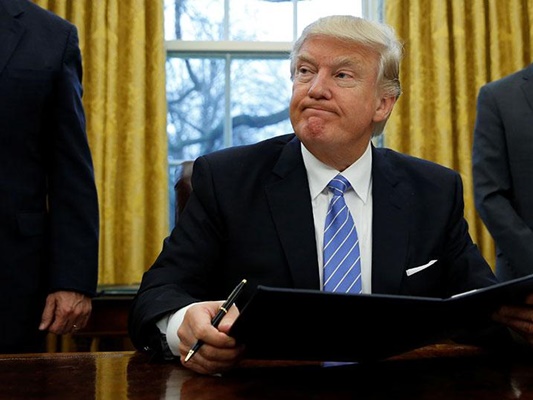 An Iranian conservative newspaper has called on President Hassan Rouhani to reciprocate a travel ban imposed by his US counterpart Donald Trump on Iranian nationals.

The conservative newspaper Javan has covered Iran’s reactions to the recent ban introduced by US President Trump on citizens of several Muslim states including Iran, calling on President Rouhani to respond to the travel ban in kind.

Trump’s executive order to slap a 90-day visa ban on the nationals of countries that “harm US interests,” including Iran, and putting the Islamic Republic on the list of “state-sponsors of terrorism” and regarding it as a “threat” to Washington have drawn reaction from some senior officials in Tehran.

President Rouhani also criticized the move on his Twitter page.

“Today’s world is one in which cultures and civilizations should live side by side, not a world where a distance is created and walls are built between nations. We should not forget the Berlin Wall which came down years ago,” wrote the president.

Iranian Foreign Minister Mohammad Javad Zarif also tweeted, “While respecting American people and drawing a line between them and the US government’s hostile policies, we will reciprocate Trump’s move in order to support our nationals.”

Now the key question is what measure should be adopted to counter the new wave of anti-Iran moves by the new US administration, and whether the positions adopted by Iranian authorities on their Twitter pages have been effective and enough, or should a stance be adopted by the Iranian Parliament on the issue.

So, the Parliament speaker and other legislators, who are people’s representatives, are expected to pass legislation called “Temporary Restrictions on US Nationals Travelling to Iran” and instruct the Rouhani administration to put it into force. The law would have several important benefits:

The Parliament has not taken any effective action vis-à-vis repeated violations of the JCPOA in recent 13 months, while such action would complement efforts made by Rouhani’s administration. Therefore, Iran’s anti-Trump action would serve as a good opportunity for lawmakers to shift out of the defensive position.

In cases where it is not possible to respond in kind, or reciprocal action would not be as effective as the action taken by the US, then taking “punitive measures” should be put on the agenda.

Trump’s executive order which slaps a visa ban on Iranian travellers to the US is in contravention of two principles of the JCPOA. First, the order runs counter to the principle of goodwill stipulated in the preamble to the JCPOA and in some provisions of the deal such as Article 36. Moreover, Trump’s decision is not in conformity with the nature of the deal, which is an international document.

Under the nuclear agreement and international law, Iran and the P5+1 group of countries are obliged to deliver on their commitments with goodwill, but Trump’s decision is a blatant instance of “ill will.” It is stipulated in Article 26 of the JCPOA that “the United States will make best efforts in good faith to sustain this JCPOA and to prevent interference with the realization of the full benefit by Iran of the sanctions lifting specified in Annex II.”

In fact, one of the objectives pursued by Iran through the JCPOA was to get the sanctions lifted. One of the prerequisites to the lifting of sanctions would be to remove restrictions on tourists, businessmen and other travellers coming to Iran.

“The EU and its member States and the United States, consistent with their respective laws, will refrain from any policy specifically intended to directly and adversely affect the normalisation of trade and economic relations with Iran,” reads Article 29 of the JCPOA.

Therefore, based on Article 51 of the UN Charter, the Iranian government, as the party affected by the violation of the deal, can suspend the fulfilment of its commitments in response to Trump’s executive order and in line with adopting a proportionate and reciprocal measure, so that US calculations about Iran will be left in tatters in the coming months.

In the meantime, one should not ignore the role of Iran’s Foreign Ministry and missions overseas in issuing visas to American nationals. These institutions can directly respond in kind to Trump’s move.