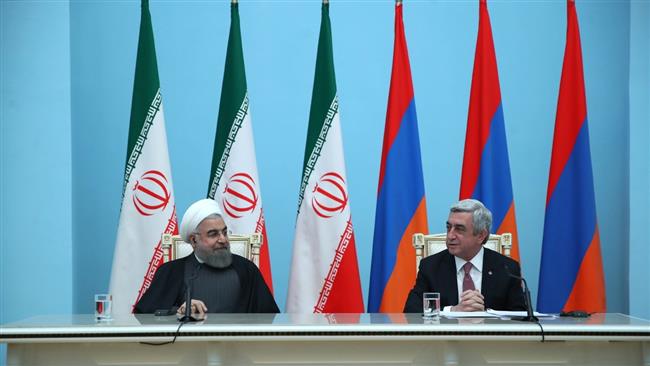 Iranian President Hassan Rouhani has expressed hoped for the restoration of peace to the disputed Caucasus region of Nagorno-Karabakh through dialog.

Describing Armenia and Azerbaijan as Iran’s “friendly neighboring countries,” Rouhani expressed optimism that “a lasting peace” would be established in the Karabakh region “through negotiations and political means.”

“Such lasting peace would serve the interests of all regional countries,” Rouhani said during a joint press conference with his Armenian counterpart Serzh Sargsyan in Armenia’s capital, Yerevan, on Wednesday.

Peace cannot be established through military means, the Iranian president said, adding, “We can witness security and stability in the region through dialog within the framework of international law.”

The Nagorno-Karabakh conflict began in 1988 and escalated into armed clashes after the collapse of the Soviet Union in the early 1990s. Sporadic tensions and border skirmishes have continued in the region despite a ceasefire signed in 1994.

In April, a new wave of unrest erupted in the region and surrounding areas in Azerbaijan, which killed at least 110 people.

A shaky Moscow-brokered ceasefire took effect on April 5 and stopped the huge fighting, but the two sides still continue to accuse one another of violating the truce.

Elsewhere in his remarks, the Iranian president touched on the issue of terrorism and called for a collective campaign against the menace until it is fully eradicated.

Rouhani said Iran and Armenia saw eye to eye on the necessity of rendering assistance to Iraq and Syria, which are both grappling with terrorism, as well as the need for delivering humanitarian aid to conflict-hit nations, especially people from the Syrian city of Aleppo.

Rouhani also pointed to the development of Tehran-Yerevan ties in the sector of energy and said the two sides had reached an agreement to enhance cooperation on a deal for Iran to swap gas between Turkmenistan and Armenia, as well as to exchange electricity and complete the third electricity transmission line between the two sides.

He said the railroad links between Iran and Armenia connecting the Persian Gulf to the Black Sea would facilitate the expansion of trade and economic ties between the two countries and also with other countries.

The Iranian president said the two countries had also agreed to facilitate the activities of businessmen and investors, including in Aras Free Zone, located in the northwest of Iran at the border point with Armenia and Azerbaijan.

The Armenian president, for his part, said the two countries were determined to implement their agreements on gas and electricity cooperation.

Sargsyan said the railroads connecting the Persian Gulf with the Black Sea would facilitate the transition of goods and the export of Iranian commodities to European markets.

Before their joint press conference, the Iranian and Armenian presidents held a meeting to discuss bilateral ties, regional developments and issues of mutual interest.

The two presidents highlighted the cooperation agreements signed between the two countries on energy, transportation, telecommunications and industry aimed at boosting trade ties and developing the infrastructure in the two countries, said part of the statement.

The statement said the two presidents also reaffirmed their countries’ opposition to the development and use of weapons of mass destruction.

Rouhani also invited his Armenian counterpart for an official visit to Iran.

Heading a high-ranking politico-economic delegation, the Iranian chief executive arrived in Yerevan on Wednesday on the first leg of a Central Asia tour which will also take him to Kazakhstan and Kyrgyzstan.

Rouhani’s visits to the three countries come at the invitation of the respective countries’ heads of state.