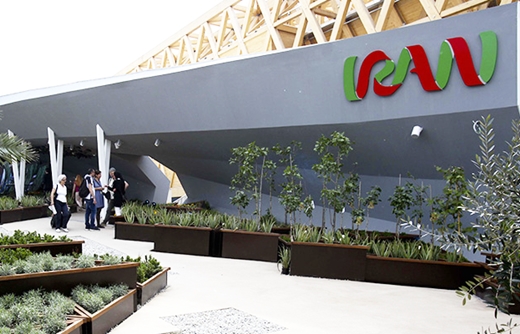 Iran’s presence at Expo Milano 2015 has come under criticism by a media outlet which says the exclusive elements of the Iranian culture were all absent in the exposition.

Iranian officials have tried to make the country’s pavilion at Expo Milano 2015 beautiful enough to attract visitors and make them familiar with Iran, but the pavilion has no feeling of Iran and the country’s [hand-woven] carpets and 2,500-year-long civilization are conspicuous by their absence in the expo.

Iranian Labor News Agency (ILNA) on August 16 released a report on Iran’s presence at Expo Milano 2015 and critically reviewed the performance of those in charge of the Iranian pavilion at the international event. The following is the translation of parts of that report:

The Expo is a place to introduce countries to each other and help visitors get familiar with the culture, economy and politics of other nations. Developed nations hold one expo every five years and this year Italy has hosted 147 countries which have come to Milan with their famous brands. World Avenue, the venue of the expo, is quite a distance away from the city center, but the visitors have access to public transport to get there.

[…] World Avenue – the exposition site – has only one intersection. Iran, Switzerland, Austria, the US, Germany, Turkey, Japan, Qatar, Russia, and a few other countries are located on the western side of the intersection. […]

Iran face to face with the US and Germany

[…] Visitors can see the US and then go to Iran’s pavilion [on the first floor] which is like a table cloth which displays the country’s four seasons. Iranian officials have not fared successfully in this regard, but the country’s pavilion still plays host to many people from other countries.

Iran and other nations

Young students are working in Iran’s pavilion as translators […]. They say they seek to introduce their country to foreign visitors in the best way possible.

At the entrance of the pavilion, a young student gives Iran’s flags to children and welcomes the visitors. They first watch different species of plants, but unfortunately there are no names or extra information of the species and where in Iran they grow.

Iran’s pistachios in the window

A few steps down the hall, visitors get a glimpse of flowers which carry no name tag or other information. Then they see pistachios and saffron in display windows. Although Iranians are famous [around the world] for their hospitality and generosity, there are no pistachios to entertain the visitors. […]

Iran’s art and culture on display on LED TV

Different films in English on Iran’s art and culture are screened on a big LED TV, giving detailed information about agricultural industries and Iran’s music. […]

After watching the first floor, the visitors go to the ground floor where an Iranian restaurant is located. It is a private sector-run restaurant which uses Iran’s name to provide its customers with foods which are not excellent in quality. The [high] price and [not so good] quality of what it offers is noticeable in this restaurant. […]

No sign of Persian carpets and Iran’s ancient civilization

There is no sign of Persian carpets and Iran’s 2,500-year-old civilization in the 5,000-meter-plus Iranian pavilion. Those in charge of Iran’s pavilion could have seized this opportunity if they had paid more attention to the content of the pavilion. If Iran’s carpets and history had been displayed in Italy, it would have been more useful for Iran, because at the heart of Europe people have no sufficient knowledge about Iran. A number of visitors asked about Iran’s civilization and wondered why nothing of that civilization is seen in Iran’s pavilion! […]