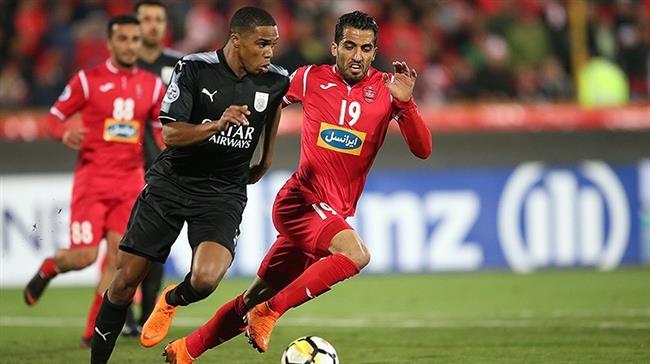 Iran’s Persian Gulf Pro League professional soccer clubs Persepolis and Esteghlal have registered valuable victories over their rivals in the group stage of the 2018 Asian Football Confederation (AFC) Champions League, and progressed to the next level of the tournament.

Persepolis, backed by a vociferous home crowd, needed less than three minutes to go in front.

Mohammad Ansari whipped in a tricky cross from the left wing, which Al Sadd defender Morteza Pouraliganji fell for and inadvertently headed past his own keeper to give the hosts an early lead.

The visitors then went to great lengths in search of an equalizer. Spanish midfielder Xavier Hernández Creus, better known as Xavi, and Algerian forward Baghdad Bounedjah came close to scoring in the first half, but their efforts were not particularly effective.

Boualem Khoukhi finished off Bounedjah’s cross in the 62nd minute. However, the referee disallowed the goal for offside.

Al Hilal started the match in a stronger fashion, and its first attempt on goal came in the sixth minute, when Achraf Bencharki was about to score the opener but his header from the edge of the six-yard box sailed over the bar.

The Saudi team then mounted a number of attacks in a bid to break the deadlock.

Mokhtar Fallatah received the ball from Mohmmed Al Burayk’s cross in the 19th minute and dribbled forward to attempt a strike. His shot was, however, saved at the bottom left corner.

Finally, Esteghlal took the lead in the 36th minute. Yasser al-Shahrani made a defensive mistake after he failed to clear the ball in the penalty area, and Esteghlal’s 30-year-old Vouria Ghafouri fired a shot into the center of the net.

Al Hilal tried very hard to level the score in the second half, but all to no avail.