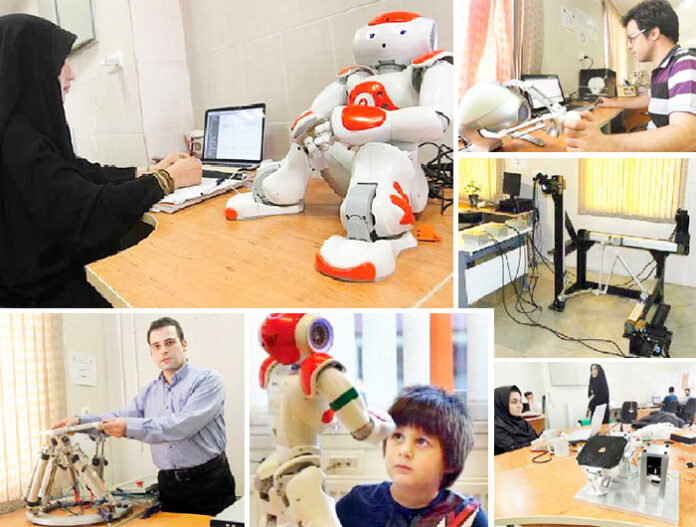 Mehdi Tale Masouleh, an Iranian scientist with a Ph.D. in Mechanical Engineering (Robotics) from Laval University, Canada, takes us on a 2-hour tour of the world of Iranian robots.

Masouleh, who heads a team of 20 students majoring in mechanical and electrical engineering, has explained about each of the robots developed in Human-Robot Interaction Laboratory (HRILAB).

Here is IFP’s translation of excerpts from Jame Jam’s report:

“Four Degrees of Freedom” is a type of parallel robot, named Delta, which can move forward, backward and downward without any help. Thanks to its four agile arms, the robot is able to spin and do all the activities such as packaging in high speed.

The name, “Four Degrees of Freedom”, actually comes from the fact that it can move in four directions.

When asked about the meaning of Human-Robot interaction, Masouleh explained, “Here, we are trying to build robots that can acquire the knowledge of doing things from humans.”

“This is how it works,” he added, “A human takes the arms of the robot with his or her hands and guide it towards carrying out a special task for the first time.”

“When a novice robot wants to learn doing a new task, it gains the capability through interaction with humans, and then performs it automatically.”

This will lift the burden of writing mathematical equations and all the complexities at every level.

Experience of Flying with Guff-Stewart Robot

There is no doubt that all of us have a strong willingness to experience flying in the sky and steering an airplane. “Six Degrees of Freedom Pneumatic” robot realizes the dream.

“It is a flight simulator that provides student pilots with an opportunity to learn flying a plane,” Masouleh said.

He went on to say that not many engineers work on these parallel robots because controlling the air pressure in them is not an easy job and requires precise calculations.

“Guff-Stewart robot is controlled by special software and unlike the Delta robot, it does not have a close interaction with humans,” he went on to say.

Falcon is a parallel type, dental robot that provides the opportunity for dental students to participate in a practical program with realistic training courses.

“This is actually good news for those students who are scared of being trained on the teeth of a dead body.”

Autism is a serious developmental disorder that impairs the ability to communicate and interact.

As individual and social problems are interwoven with the disorder, scientists from different countries have come to the conclusion that treating autism patients is more practical by using robots.

Scientists in the HRILAB have bought a robot called NAO from France, in an effort to change the angles of the patients’ look and the position of their heads.

“Our goal was to cultivate a relation between an autistic child and the environment,” Masouleh noted.

One of the scientists in the lab described their work as distinctive, saying, “Different countries have worked on the movements of these children’s hands and feet; however, no one has ever embarked on an autism treatment method as we do here.”

“A robot looking like a big eye caught our attention at the corner of the laboratory,” Jame Jam further reported.

The robot is equipped with image stabilization technology, and thus reduces the likelihood of taking blurry photos by moving the camera lens automatically to compensate for camera’s unwanted movements.

“It is installed under helicopters, for example, and shoots clear images,” Masouleh went on to say.

“It can also pursue a specific object on the user’s call. Hava Naja (Iranian Police Aviation Unit) commissioned us to design the robot.”

The robot “Three Degrees of Transitional Freedom”, which is named after its Canadian counterpart, is the second robot of its type in the world that handles dangerous and hazardous chemicals in high-risk, industrial environments.

Extensive studies have been conducted in the HRILAB to upgrade the robot, so that it can make 3D prints with high precision and speed, Masouleh noted.

Humans-Robots Interaction Lab was established four years ago. If you are a fan of robotics, feel free to visit the Lab’s website (http://fnst.ut.ac.ir/hor-lab) and enjoy a free tour of the Lab’s equipment and robots.