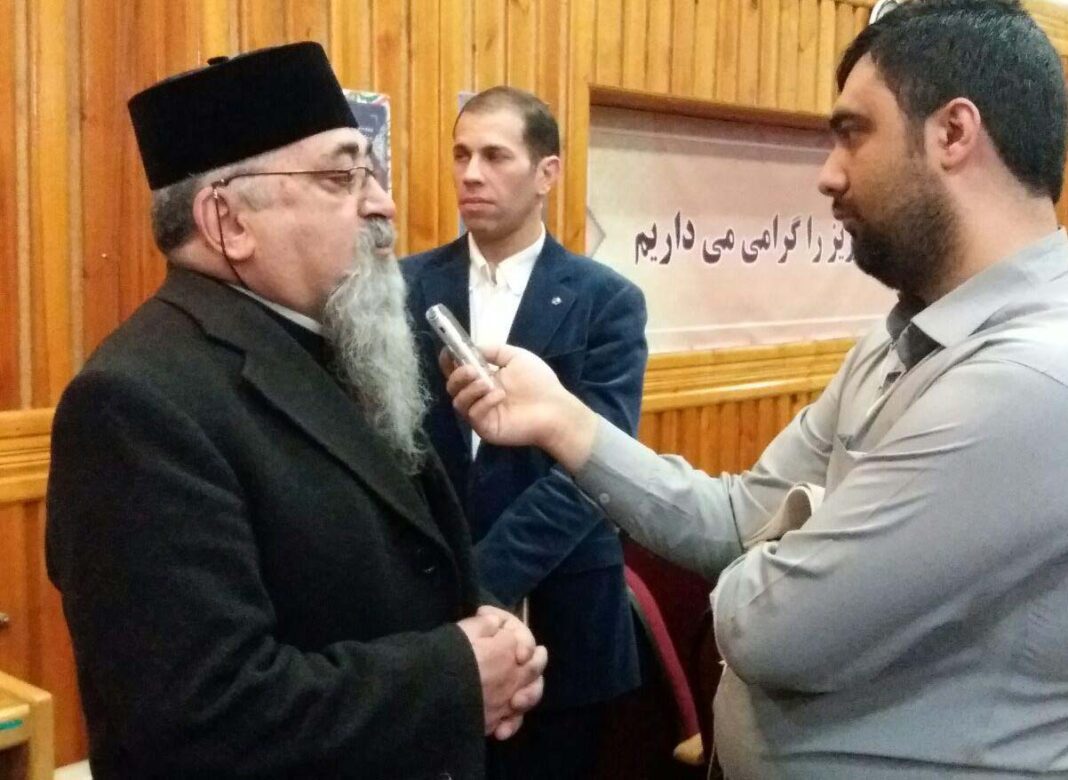 An Armenian priest has lauded the achievements of the Islamic Revolution of Iran (1979) and its founder and leader Imam Khomeini, saying they brought us the gift of freedom.

Imam Khomeini managed to rise against the Pahlavi regime, defeat it and win freedom for the Iranian nation as well as the religious minorities in the country, said priest Masroup Ratoosian, currently serving in Grigor Lusavoritch Church in the Iranian capital of Tehran.

Independence and freedom were two of the most important achievements of the Islamic Revolution of Iran following the overthrow of the dictatorial and oppressive Pahlavi regime — that ruled the country from 1925-1979 — in 1979.

According to a Farsi report by Mizan, these two goals have always been pursued by all schools of thought.

During the Iranian nation’s battles and rallies against the Pahlavi regime, these two concepts were never exclusive to a certain group, party or school. All Iranians, regardless of what religion, attitude and way of thinking they had, strived for these two goals.

While the Pahlavi regime did its outmost to promote the unfounded and deviational thoughts and beliefs of the Baha’i cult in the Iranian society, monotheistic religions such as Islam, Christianity and Judaism as well as their followers were faced with a host of restrictions.

What follows is a brief account, narrated by Armenian priest Ratoosian, of the oppressions, restrictions and difficulties the Christian clergymen and non-Muslim people faced during the reign of Pahlavi regime in Iran:

“Every year, the day of the victory of the Islamic Revolution — this year, falling on February 10 — coincides with a sacred day in Christianity. It is either coincident with the Saint Sarkis (a Centurion in the Roman Empire reputed to possess the characteristics of piety, faith and valor) day or Saint Vardan (an Armenian military leader, a martyr and a saint of the Armenian Church) day. This year, it is concurrent with Saint Sarkis day.”

He noted that in 1979, the victory of the Islamic Revolution was coincident with Saint Vardan day.

Ratoosian said Imam Khomeini as well as the two Christian saints each fought with the oppressive regimes of their era and eventually, [all three] emerged victorious on the same day.

Referring to the role Iran’s Christian society played in the downfall of the Pahlavi regime, Ratoosian said, “At that time, I was doing my military service as a private at Lashgarak military base in Tehran. When Imam Khomeini issued the directive that soldiers were required to evacuate military bases and join the people on the streets, I also left the base and fought shoulder-to-shoulder with the zealous Iranian nation against the last king of Iran Mohammad-Reza Shah.

“Then — before the victory of the Islamic Revolution — the Pahlavi regime was promoting atheism and a number of people were drowning in sin. This situation was very agonizing for us Christians.”

During the Pahlavi reign, Christians were faced with a host of problems for holding their celebrations commemorating Saint Vardan’s valor, because he was known for repudiating the Persian religion and instigating an Armenian rebellion against the Sassanid (the last imperial dynasty in Persia before the rise of Islam) overlords, he recalled.

“The cruel regime neither liked him nor what he had done against the Sasanid Empire and, thus, imprisoned a number of Christian Armenians who wanted to hold the commemoration celebrations by hook or by crook. This is while, after the Islamic Revolution, Christians are permitted to hold their ceremonies conveniently.”

Commenting on the supports provided by the Islamic Republic of Iran and the country’s cultural institutes and organizations to facilitate the holding of the Armenians’ ceremonies, Atrin Babaeiance, who is responsible for the public relations of the Armenian Diocese of Tehran, said, “At present, we are provided with ample opportunities to hold our rituals. The related Iranian organizations prepare the grounds for us to freely and conveniently hold our rites as well as sport and cultural events.”

Assyrians, Zoroastrians and Jews, who are followers of other monotheistic religions, also enjoy a favourable condition in Iran, having their own temples and being permitted to carry out their religious, cultural and social activities with ease, he added.