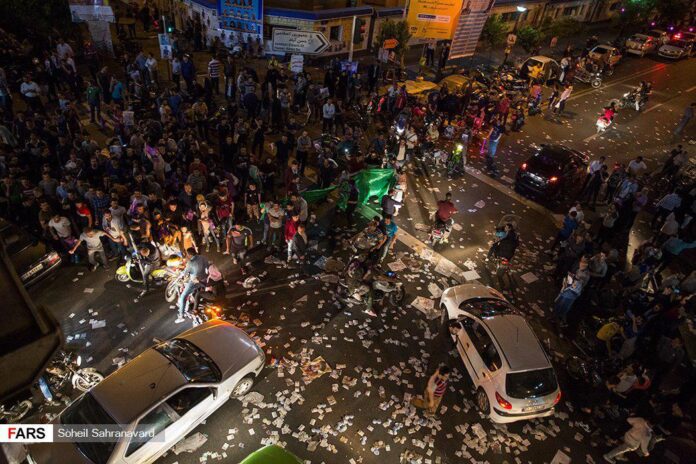 An Iranian sociologist says arguments in the streets between supporters of different presidential candidates not only do not widen the gap between people, but also bring them closer together.

Every four years, the ambience of big and small cities in Iran changes; routine everyday discussions are replaced by a kind of common and public discourse; everyone hopes for the situation to improve; everyone gears up for an event which is going to determine the future of them all, despite their similarities and differences, for the  four years to come. Every four years, cities, streets and alleys take on a different mood. The mood on the last night of the election campaign [Wednesday] was similar to that of previous years.

Crowds of people, most of them men, have got together. Their voices are inaudible. Little by little, their voices get louder. Arguments about the upcoming elections are heating up. Everyone interrupts the others and tries to get his own way.

“Dear sir, I’ve been through thick and thin, why are you against this for no good reason?”

But he is interrupted.

“If you’ve been through thick and thin, I’m worldly-wise, too. I’m educated. Don’t look at my age. My beard is not as grey as yours, but I’m more experienced than you are. I have traveled a lot, and read lots of books.”

Another person butts in.

“What does it have to do with books? We grew up here in bazaar. We know what’s good for people.”

Similar conversations are taking place elsewhere as well. In taxis, on buses and on the subway, and even in cyberspace and on different social media networks. But unlike in previous days, now people need more time. Short conversations won’t do. Those who think they have a lot to say have come onto the streets to express their support for the candidate they are going to vote for on Friday. The conversations are sometimes soft and friendly, and sometimes inflammatory, like this conversation between the young man and the older one, both of whom are raising their voices.

Is this situation worrying? Will it bring about rapport or divisions? Iranian sociologist Mohammad Amin Qane’i-Raad believes such interactions are the prerequisite for a dynamic society.

Here is what he told Khabar Online about that.

“In elections, we need two kinds of interaction: cold and warm. Cold interaction takes place via cyberspace. It is not face-to-face, it is short and without any specific result. However, warm interaction means face-to-face conversation between people, which creates energy and motivation. Elections need this energy, which pushes people away from indifference and brings them to polling stations. Such energy encourages people to spend so much time on getting to know the candidates and decide which one they are going to vote for.”

Instead of crowded shops and the hustle and bustle of shoppers, what draws attention this time are the campaign posters and crowds of candidates’ supporters. In every corner of the Tajrish Square in northern Tehran, men and women are standing with coloured bracelets holding the posters of their favourite candidates. Most of them are young people, but there are also the elderly and children, who are encouraging others to vote for their desired candidates. Different types of ribbons, flags and posters are changing hands. Some are offering flowers to others.

A group of people, who obviously differ on the issue of elections, have got together.

“Why should we vote? Which candidate, if elected, would benefit the country most? Which campaign promises will be fulfilled? Which candidate has had a better performance, and who was more successful in the presidential debates?”

There is no need for an excuse to open a conversation. Looks like everyone knows each other. They simply stop and begin to talk. Those riding in cars join in, too. They begin to honk their horns. The posters of their favourite candidates are all over their cars. They even play songs by singers supporting the candidates of different camps.

Qane’i-Raad, a former head of the Iranian Sociology Association, regards such interaction as constructive.

“These conversations make it possible to promote social learning and give people the chance to talk to each other. Dialogue is the most important condition for living in a sound, happy and dynamic society. If we want to have a society based on wisdom, we should set the stage for dialogue. It is good to see individuals spend time to agree or disagree with each other, offer reasoning and criticise different issues. As long as it is in the form of dialogue, it is positive and constructive. But it shouldn’t turn into insults and mudslinging.”

Here, two groups are standing opposite each other chanting slogans. Each group supports one of the candidates. Further down the street there is one of the campaign offices of one of the candidates. A number of supporters of the rival candidate are standing close by and asking those leaving the office to have a conversation with them. It’s a kind of street debate. They show whatever they have to the supporters of the other camp, including information, news, rumours plus evidence proving those rumours are false, documents, pictures and films on their cell phones.

Qane’i-Raad believes one should not worry about differences because it is these very differences that help improve the situation.

“During election time, we need differences as much as we need rapport. Differences should exist in such conditions, so that candidates of different camps could strive to eliminate their weaknesses. Moreover, these differences will teach people how to listen to one another with rapport, and how to accept opposing views without becoming furious or disrespecting each other.”

He believes the displaying of such differences is the sign of a powerful society.

“Of course such differences should be in such a way that they do not lead to fundamental gaps. A society is powerful whose citizens get to know each other through such interactions. It will be naïve to think that such dialogue is detrimental. It is a kind of a paradoxical atmosphere. In other words, it helps distinguish people, and sometimes widens the gap between them, but at the same time brings them closer together. A key point is that such conversations are taking place by people themselves. If people were ordered to come to the streets, then the dialog would definitely not be as useful. But the fact that people willingly come to the streets and talk together for hours means they have a lot in common.”

It’s midnight. The streets are not as crowded as a couple of hours ago. Still, there are a lot of people on the streets. With their presence, words and posters, they are encouraging others to vote for their favourite candidate. They are making last-ditch efforts to sway voters.