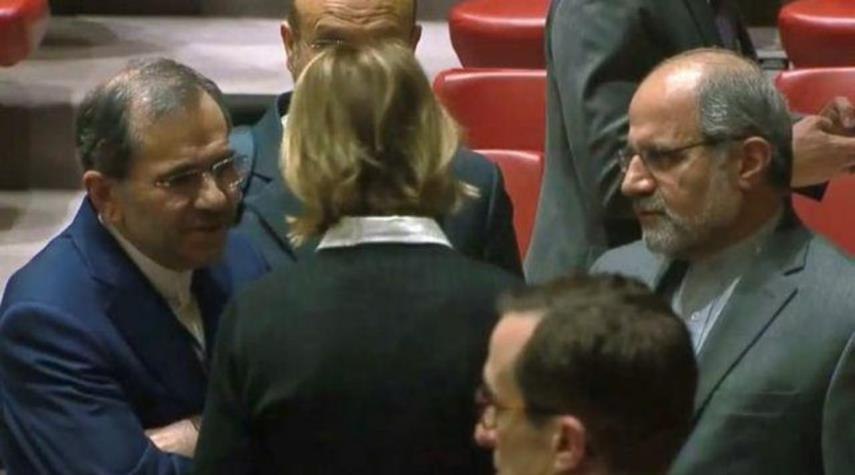 Iranian and US ambassadors to the United Nations have held a short conversation on the sidelines of a UN Security Council meeting.

A UN video shows the new US ambassador, Kelly Craft, approaches the Iranian delegation inside the Security Council hall on Thursday and holds talks with Iranian ambassador Majid Takht Ravanchi for a few minutes.

During the short conversation, held on the sidelines of a Security Council meeting, the American envoy has offered condolences over the death of a two-year-old child suffering from a rare disease called epidermolysis bullosa (EB), according to Iranian UN mission spokesman Alireza Miryousefi.

The meeting came shortly after a speech by Takht Ravanchi, in which he said Sweden, under the pressure of US sanctions, has stopped exporting special bandages for patients suffering from EB, a rare genetic condition resulting in easy blistering of the skin.

He said a 2-year-old girl from the city of Ahvaz, named Ava, has lost her life as result of this disease. Takht Ravanchi added that Ava was one of the “butterfly children” who are known so because their skin is as fragile as butterflies. Nowadays, the import of these special bandages for EB patients has become almost impossible, and that has endangered the lives of innocent children like Ava.

“Now butterfly children are feeling the pain of the US inhumane sanctions with their hearts and souls. In June this year, Ava was relieved of pain forever and passed away. Her story only reflects the tip of the iceberg, as children and adults with cancer and rare diseases are struggling with death in silence. Killing children and patients takes no courage,” underlined Takht Ravanchi in his statement.

Miryousefi further stressed that no other issues were raised in this brief conversation. He added that it is not strange for diplomats from different countries at the United Nations headquarters to meet by chance or have a brief conversation.