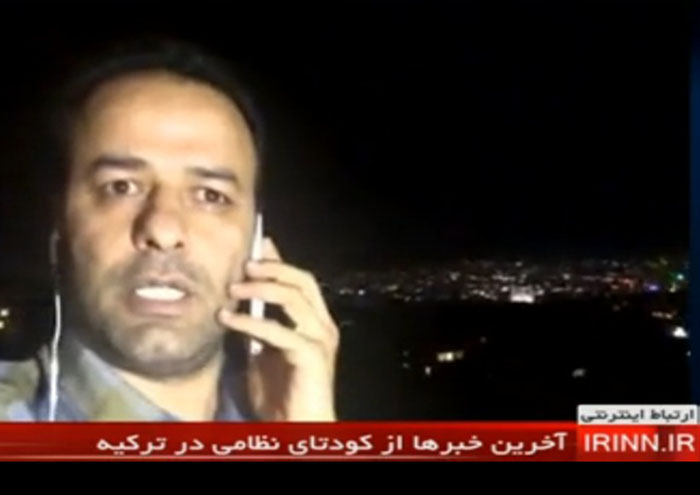 The Islamic Republic of Iran News Network, IRINN, and its Ankara correspondent Majid Akhavan, marked an unprecedented moment in IRIB’s professional history through their live and up-to-the-minute news coverage of the recent coup attempt in Turkey.

According to a report by Khabar Online, as translated by IFP, the Iranian TV channel was unsurpassed in providing the latest news from the coup attempt in Turkey and took the lead among other foreign channels.

Majid Akhavan, the IRINN’s correspondent in Ankara, in a courageous attempt recorded a stand-up report right in front of the putschists’ tank in Ankara to feed the Iranian audiences with trustworthy news.

The news anchor could not hide his concern for the reporter, who was doing his job in the heart of the coup, and came out to say, “Dear Majid, be careful, take care of yourself!”

“His coverage of the coup can be compared with Christiane Amanpour’s job during Kuwait-Iraq war. It is not at all an easy job to be present at the scene immediately and send instant reports in a very risky situation with minimum equipment,” he noted.

IRINN’s news coverage of the coup attempt in Turkey, if taken as an exemplar by other news channels, can eliminate the Iranian audiences’ need for foreign news outlets.