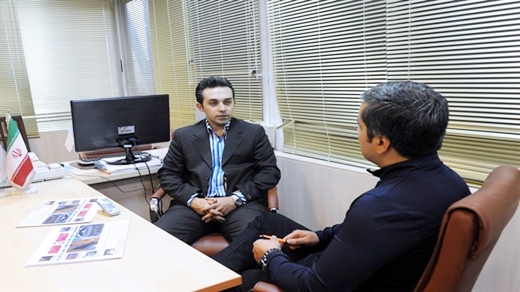 IRAN DAILY: Tell us about your inventions.

MORTEZA SHIRMOHAMMADI: I have registered 22 inventions in the fields of mechanics, home appliances, auto parts, and robots during from 2006-2009.

I registered a plan to make a robot in 2006 which can be useful in drilling oil wells. I took part in global contests and won two bronze medals in international competitions in Nurnberg (Germany) and Kuala Lumpur (Malaysia) in 2007, and one silver medal in the 2008 competitions in Geneva, Switzerland.

I have been interested in research and using various devices since my childhood. However, the idea of invention came to me during my university years.

Although I graduated in civil engineering, my inventions pertain to mechanics.

Tell us more about the robot you have made for deep wells.

These robots can be applied inside the wells. They can be used for mechanical research, as well as classification of soil and the walls of the well through sampling and photography.

The robot conducts operations in the forms of tests, geological research, and finding the existence of fault lines. The robot can be applied in dangerous wells (instead of manpower), oxygen-free wells, and wells which have toxic gases. The remote-control robot is also used for welding, pipe cutting, and repairing pipes.

How did you get the idea of making robots?

I watched a movie showing an incident involving mine workers. They were trapped in the mine. Rescue workers had to dig another well to help them, which took a lot of time.  I think the idea of digging another well was wrong because it was time-consuming and it was not economical.

Therefore I thought of reworking and modernizing current well-digging devices.

How can the government help inventors?

Bureaucracy bothers us so much. I think a special budget should be set aside for granting loans to inventors. Since inventors generate scientific research, their projects can bring in revenue.

What is your plan for the future?

Currently, I am involved in producing renewable energy, and systems which can produce free energy from renewable sources. Today, I am concentrating on magnetic energy.