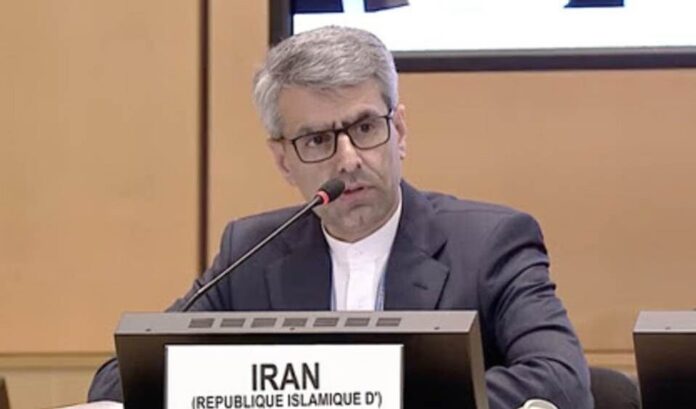 Iran’s Permanent Representative to the United Nations Office in Geneva has called on the UN to focus on heinous war crimes, crimes against humanity and blatant violations of human rights committed by Israel.

Ismail Baghaei Hamaneh, Iran’s Permanent Representative to the UN European Headquarters in Geneva, made the remarks in a meeting between ambassadors of member states of the Organization of Islamic Cooperation (OIC) and members of the United Nations Commission on Human Rights in Geneva on Friday to discuss crimes committed by the Zionist regime against the oppressed Palestinian people.

The Iran’s envoy has also called for distinguishing between fake and original accounts, referring to unfounded stories equate victims of Israeli crimes with the perpetrators of the heinous acts.

Such an account that perceives victims of Israeli crimes in the same place of the perpetrators of the misconduct is humanly shocking, legally unfounded and morally shameful, Baghaei Hamaneh cautioned.

The UN Commission on Human Rights has a historic responsibility to prevent normalizing systematic violation of human rights by the apartheid regime of Israel, he mentioned.

The Iranian envoy urged other participants in the meeting to cry out for justice and do not allow war crimes, crimes against humanity and blatant violation of human rights to become normal throughout the world.

Given the fact that the Zionist regime continues to commit crimes against the Palestinian people in the Gaza Strip and other regions of the occupied land, Muslim nations called for holding an urgent session by the UN Commission on Human Rights, which was held on May 27, 2021, issuing a resolution against the Israeli crimes.

According to the resolution, a group of three international lawyers from South Africa, India and Australia have been tasked with reviewing Israeli crimes in Palestinian territories.

Envoys from Iran, Pakistan, Turkey, Bangladesh, Malaysia, Maldives, Egypt and Palestine have urged the UN commission to hold Israel accountable for the crimes.

The UN Commission on Human Rights is scheduled to report on the issue in June next year.