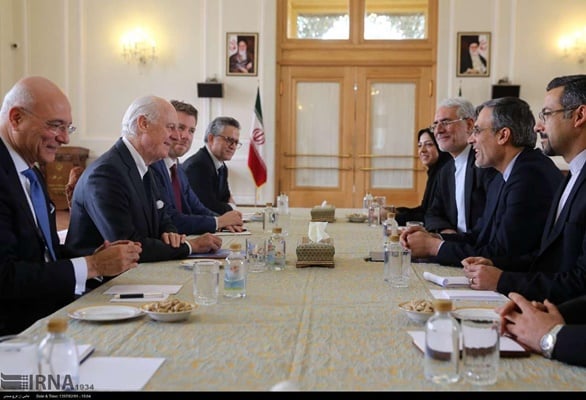 Hossein Jaberi Ansari, a senior assistant to Iran’s foreign minister, and Staffan de Mistura, the UN’s Special Envoy for Syria, have sat for talks in Tehran.

During the lunch meeting held in honour of the UN delegation’s visit to Tehran, the two sides exchanged views on the latest developments in Syria and explored the ways to implement Astana agreements.

The final document of the Syrian National Dialogue Congress in Sochi as well as the Iran-UN cooperation to put an end to the Syria crisis and restore peace and security to the war-torn country were also among the main issues discussed by De Mistura and Jaberi Ansari, who also serves as Iran’s senior negotiator at the international Astana talks on Syria peace.

De Mistura arrived in Tehran on Saturday after his visits to the capitals of other guarantor states of the ceasefire regime in Syria, namely Russia and Turkey.

The UN envoy is expected to hold talks with other Iranian officials during his stay in Tehran.

He will also meet with European ministers and American officials in a conference slated for April 24 and 25 in Brussels.