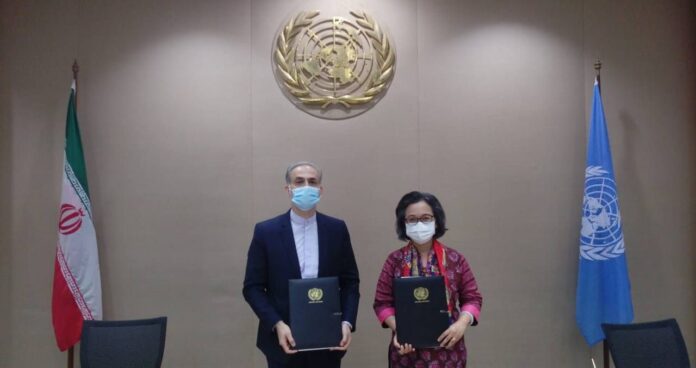 The Islamic Republic of Iran and the United Nations Economic and Social Commission for Asia and the Pacific (ESCAP) have signed an agreement on January 21 as the new US president has taken office.

Iran and the ESCAP have reaffirmed resolve for closer cooperation by signing the administrative and financial agreement for the Asian and Pacific Centre for the Development of Disaster Information Management (APDIM).

The agreement was signed by Iran’s Ambassador to Bangkok and Permanent Representative of Iran to ESCAP, Seyyed Reza Nobakhti, and Armida Salsiah Alisjahbana, Under-Secretary General of the United Nations and Executive Secretary of ESCAP.

The proposal to establish APDIM was approved in an annual meeting of the UN Economic and Social Commission for Asia and the Pacific (ESCAP) in 2015. In January 2018, Head of Iran’s Plan and Budget Organization Mohammad Baqer Nobakht and Under-Secretary-General of the United Nations Shamshad Akhtar signed the Memorandum of Understanding for the establishment of APDIM. The Iranian administration’s proposed bill on the centre was ratified by Iran’s Guardian Council in 2019.

APDIM has been established with the purpose of natural disaster risk reduction through the exchange of technical capabilities and disaster information management among 66 Asian and Pacific countries. The Asian and Pacific Centre for the Development of Disaster Information Management would strengthen Iran’s international position in the fields of humanitarian activities and disaster risk reduction.