Iran to Sue US over Sanctions: President Rouhani 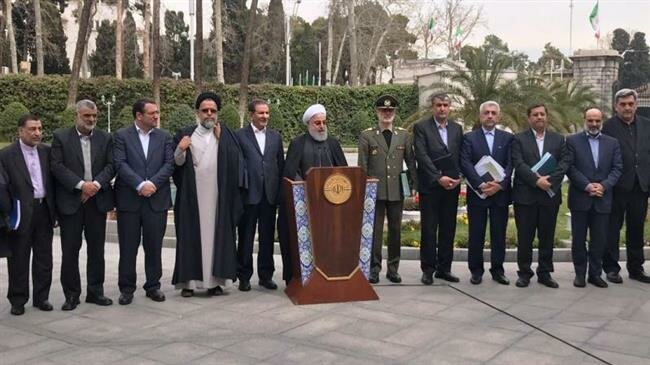 President Hassan Rouhani says the government will sue US officials behind draconian sanctions on the country in Iranian courts before taking the case to international courts of justice.

In a speech broadcast live on Monday, Rouhani said he had ordered the ministries of foreign affairs and justice “to file a legal case in Iranian courts against those in America who designed and imposed sanctions on Iran.”

“These sanctions amount to crime against humanity,” he said, adding if an Iranian court finds against US officials, Iran will pursue the case in international courts of justice.

Iran’s litigations against the US have already succeeded in international tribunals. In October, the International Court of Justice (ICJ) ordered the US to exempt exports of humanitarian and civil aviation supplies to Iran.

“We were able to win in both the International Court of Justice in the Hague and the European courts, which means that we were able to legally defeat America, and of course, this trend should continue,” Rouhani said.

He said the enemies will never succeed in their attempts to weaken the Iranian nation despite having tried all in their power over the past 40 years.

The Iranian people, he said, has long resisted outside pressure and will keep up the fight until the enemy is defeated.

“The enemy made some attempts but never achieved what it desired even though sometimes” the pressure was too much, the president said.

Referring to US President Donald Trump’s withdrawal from the 2015 nuclear agreement and his pledge to tighten economic pressure on Iran, Rouhani said the US was looking for a way back to Iran after the nation overthrew the Shah during the 1979 Revolution.

“What the US did was based on the idea that they could return to Iran if they could keep the sanctions and increase the pressure,” he said.

Rouhani said Washington thought that abandoning the nuclear deal would prompt Iran to also abandon the agreement and that it could eventually have all UN sanctions removed under the deal, reinstated.

“We ruined their plan; they didn’t expect us to act like this,” he said.

The US, Rouhani said, expected Europe to follow its lead in quitting the nuclear deal but except for a few countries, the world stood in solidarity with Iran.

“Let the world know that what America has done is not against Iran or nuclear technology; rather, it is against the well-being, environment, food, medicine and the lives of the Iranian people,” he said.

Rouhani touched on some economic problems in the country, saying their root causes had been identified and the government was taking necessary measures to address them.

“The thieves ambushed us, our progress briefly slowed down and things became a bit difficult,” he said.

“A superpower like the US, the Zionist regime (of Israel) and the region’s reactionary (regimes) all joined forces to bring the Iranian nation to its knees and take their 40-year revenge” on Iran, he said.

As an example, the president noted, while there were still major sanctions against Iran, the country was able to launch new phases of South Pars gas field in the Persian Gulf.

“Today is a very auspicious day for the Iranian nation, which has dealt strong blows to enemies, because they thought that by imposing sanctions, they would be able to stop all our plans and advances,” Rouhani said in Kangan.

Minister of Petroleum Bijan Zangeneh said Iran, which shares the South gas field Pars with Qatar, expects to operate 27 phases by next March.

According to the Ministry of Petroleum, Iran has invested $11 billion to complete the four phases and they will increase the natioanal gas production capacity by up to 112 million cubic meters per day.