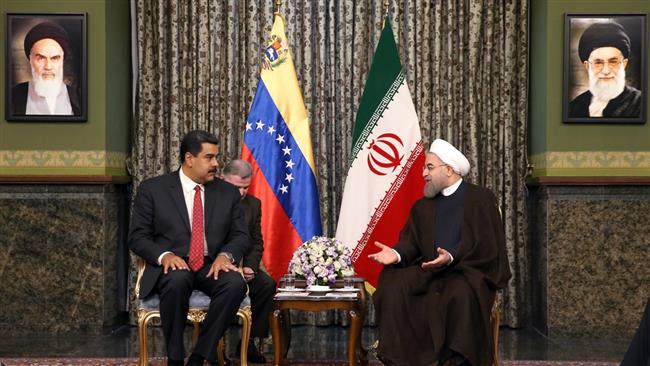 “Iran supports any measure in line with the stabilization of the oil market, fair prices and equitable quota for the producers,” Rouhani said in a meeting with visiting Venezuelan President Nicolas Maduro in Tehran on Saturday.

Rouhani further underlined the necessity of coordination and cooperation among all OPEC and non-OPEC oil producers in this regard.

Elsewhere in his remarks, Rouhani said that Latin America has a special place in Tehran’s foreign policy.

He expressed satisfaction with the expansion of relations between Iran and Venezuela, saying the development of cooperation with Latin American countries has always been of high significance to Iran.

The Iranian chief executive also touched upon the scourge of terrorism in the world and called for a collective campaign by all countries against the ominous phenomenon.

He criticized certain countries for using terrorist groups as an instrument to achieve their goals.

Maduro, for his turn, said his country was determined to expand all-out cooperation with Iran.

He said that his government backs consultation between Tehran and Caracas to accelerate the implementation of agreements signed between the two sides.

However, Saudi Arabia has torpedoed plans for a freeze on global production aimed at stabilizing oil markets, arguing that Iran must freeze its output.

Tehran, meanwhile, says that it wants to raise production to levels prior to the imposition of the US-led sanctions over its nuclear energy program.