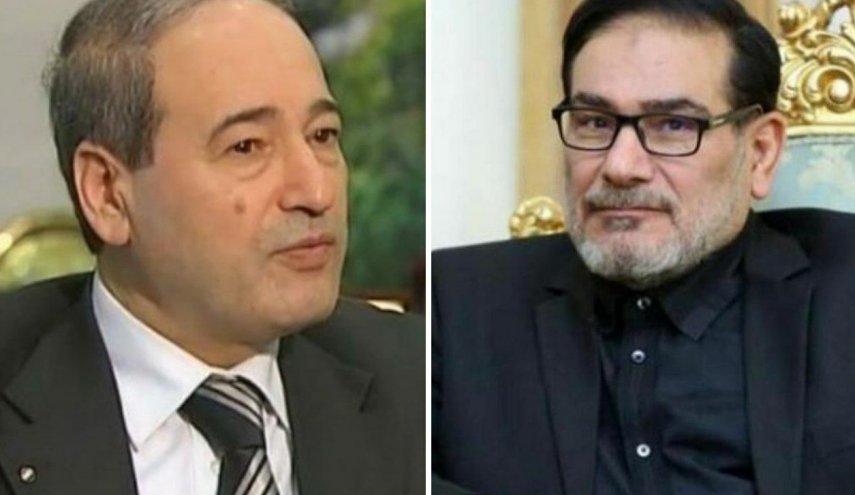 Secretary of Iran's Supreme National Security Council Ali Shamkhani has discussed the latest regional developments and bilateral ties with Syrian Foreign Minister Faisal Mekdad who is in Tehran on an official visit.

“The United States is infuriated by the collapse of Daesh in Syria and Iraq, and the victory of the resistance front, which has increased the strategic power of this front, and (America) is seeking to create new crises,” Shamkhani told the Syrian top diplomat.

He said the plot to create a security crisis in Syria was jointly hatched by the U.S. and Israel, and warned of its dangerous consequences, which “could jeopardize the security of the entire region”.

The secretary of Iran’s Supreme National Security Council noted that foreign occupation in Syria will cause insecurity and the spread of violence, adding that aggression and occupation in history have resulted in nothing but retreat and humiliating defeat.

Shamkhani condemned Israel’s repeated attacks on Syria, saying they are in line with the regime’s brutal aggression against Palestine and Lebanon. He added that resistance and forceful fight are the only way to get rid of the “Zionist cancerous tumor” in the region.

Referring to the strategic relations between Iran and Syria in the political and security fields, Shamkhani emphasized that such close ties should be extended to other sectors, especially the economic field, and announced Iran’s full readiness in this regard.

Faisal Mekdad, for his part, thanked Tehran for its full support for the Syrian people and government.

“With the defeat of the united terrorism front and the establishment of relative stability in Syria, a new chapter in cooperation between the two countries has begun with the priority of economic relations,” the Syrian foreign minister stated.

He called the illegal U.S. military presence in Syria a violation of the principle of sovereignty and encroachment on the country’s territorial integrity, adding that the United States seeks to revive terrorist cells to prevent lasting stability in Syria.

Mekdad described the continuing Israeli atrocities in the region and the repeated military aggression against Syria as a clear example of state terrorism.

Referring to the vast capacities for bilateral economic cooperation, Mekdad said Iranian quality goods are popular among the Syrian people, calling for increasing the presence of Iranian public and private companies in the Syrian market.