Iran seeks holding new round of talks with Saudi Arabia 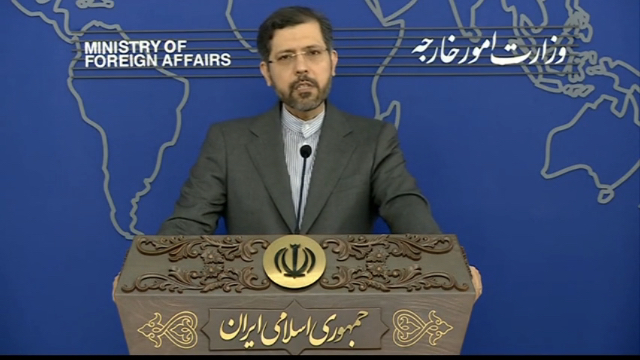 Iranian Foreign Ministry Spokesman Saeed Khatibzadeh says Iran is considering attending the next round of talks with Saudi Arabia in Iraq.

Khatibzadeh noted that Iran has tried its best to continue talks and sustainable ties with Riyadh.

On the situation in Lebanon, Khatibzadeh said foreign countries try to meddle in Lebanon’s internal affairs while Iran believes that Lebanon’s sovereignty must be respected.

In response to a question about the presence of a Saudi delegation in Vienna, he said such meetings are not limited to Saudi Arabia and all countries visit Vienna. Khatibzadeh added that the discussions are not about today and yesterday and they have happened in the past as well.

He also spoke of a South Korean delegation’s visit to Vienna during talks between Iran and the P4+1 group. Khatibzadeh said the visit had nothing to do with South Korea’s debts to Iran.

Referring to the Vienna talks he added that talks have reached a decisive point which will show if the other sides are determined enough to reach a deal or not.

The Iranian Foreign Ministry spokesman then turned to the Taliban acting foreign minister’s visit to Tehran, describing talks with the group as positive. He added that the Taliban welcomed Iran’s call for the formation of an inclusive government in Afghanistan.

Asked about the Iranian Foreign Ministry’s position on the Taliban, Khatibzadeh said Iran is not yet at the point where it can recognize the Taliban.

Elsewhere, the Iranian Foreign Ministry spokesman referred to US National Security Advisor Jake Sullivan’s remarks about Iran’s new sanctions against US officials for their involvement in the assassination of General Qassem Soleimani.

He said the US is used to imposing sanctions on others unilaterally and does not speak with others on equal footing.

Khatibzadeh also said what happened on January 3, 2020 was a flagrant war crime against a high-ranking Iranian national. He added that the Islamic Republic will sue those who ordered and perpetrated this crime and will not give up its efforts until they are brought to justice.

On Iranian President Ebrahim Raisi’s upcoming visit to Moscow, Khatibzadeh said the visit to Russia is in line with bilateral cooperation between the two countries. He added that trade and regional issues will be on the agenda of talks that will be held at bilateral, regional and international levels during Raisi’s trip to Moscow.

The Foreign Ministry spokesman also referred to the situation in Yemen. He said Iran has always tried to stand by the Yemeni people and to find a political solution to the Yemen crisis through talks between Yemeni sides.

Regarding the developments in Kazakhstan, Khatibzadeh said Iran has been closely monitoring the situation there and has been in touch with the government in the country. He added that Iran believes the people and government of Kazakhstan are able to resolve their problems but unfortunately, we are witnessing foreign interference in Kazakhstan’s internal affairs.