Iran Says Had Notified IAEA of Its Nuclear Measures 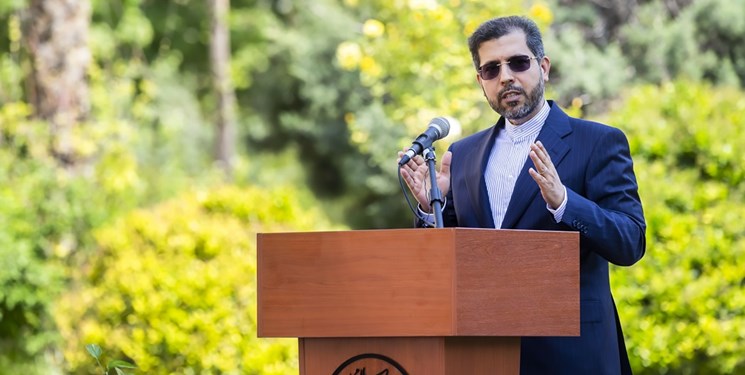 Iran's Foreign Ministry Spokesman Saeed Khatibzadeh says the country's nuclear program and activities are fully in line with the Non-Proliferation Treaty (​NPT) and its Safeguards commitments.

In a statement on Tuesday, Khatibzadeh noted that the International Atomic Energy Agency (IAEA) has been supervising Iran’s nuclear activities and that Tehran has notified the IAEA of its measures in advance.

He said Iran’s remedial reduction of its JCPOA commitments has been done according to mechanisms within the 2015 nuclear deal, and as repeatedly said, was in response to the widespread violation of the JCPOA and the UN Security Council Resolution 2231 by the United States in addition to the lack of full compliance of other parties to the accord, especially the three European countries.

“Clearly the Islamic Republic of Iran will move forward with its peaceful nuclear program merely based on its needs and the decisions made by its leadership and within its Safeguards commitments, unless the US and other JCPOA parties return to the full and unconditional implementation of the JCPOA,” he added.

Khatibzadeh once again reaffirmed the peaceful and civilian nature of Tehran’s nuclear program, and said all of the country’s remedial measures under the JCPOA are reversible provided that all the signatories honour their commitments and the US removes all its unlawful and unilateral sanctions against the Iranian nation effectively and verifiably.

His comments were made after the IAEA said in a report on Monday that Iran has made progress in its work on enriched uranium metal, with Tehran saying the process is aimed at producing a reactor fuel plate.

Iran’s representative to the international organizations in Vienna said in July that the Islamic Republic would soon produce enriched uranium metal and that the country had earlier informed the United Nations nuclear watchdog of the move.

The JCPOA was reached between Iran and six world powers, including the United States, Britain, France, Germany, Russia and China in 2015. However, the deal was ditched by former US President Donald Trump in 2018 in spite of Iran’s full compliance with its contractual obligations.

Washington then began to put enormous pressure on Iran through sanctions, in what it called a “maximum pressure” policy, in order to force Tehran to negotiate a “better deal,” prompting Tehran to take remedial measures by gradually reducing its nuclear commitments under the deal.

Since April, representatives from Iran and the remaining signatories to the JCPOA have been holding face-to-face talks in the Austrian capital aimed at bringing the US back to compliance and putting the deal back on track.

So far, six rounds of negotiations have been held in the Austrian capital, as a result of which, according to participants, “significant progress” has been made in the course of the “constructive” and “businesslike” talks.