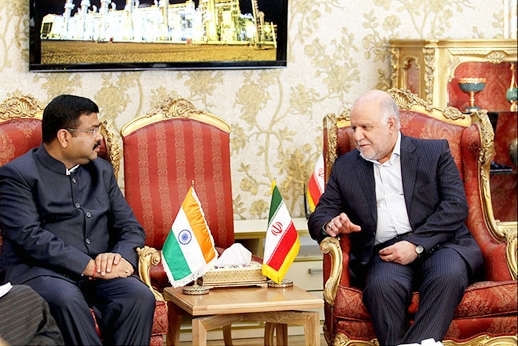 Iranian Minister of Petroleum Bijan Zangeneh said Iran is prepared to increase its oil exports to Indian refineries with support from the Indian government after removal of sanctions on Iran.

During a meeting with his Indian counterpart Dharmendra Pradhan here in Tehran on Saturday, Zangeneh underlined the long-lasting relationships between Iran and India, adding that the two countries enjoy historic political and cultural ties at the highest levels.

“I am sure, this meeting will facilitate and enhance economic relations between the two countries, especially in energy sector,” said the Iranian official.

He said Iran and India can cooperate in all energy fields including oil, gas and petrochemical industries.

“Besides expanding trade ties in oil and gas sector with India, Iran is interested in attracting investments from Indian companies.”

The Iranian minister of petroleum further said that India is one of Iran’s traditional oil customers, expressing hope that New Delhi will increase its purchase from Iran after removal of sanctions with support from the Indian government.

Regarding development of Farzad B gas field, Zangeneh said he was optimistic that a date will be designated for finalization of the talks between Iran and Indian developers of the field.

Furthermore, Iranian ministry of petroleum is prepared to supply natural gas to any other energy-consuming projects that Indian firms finance in Iran.