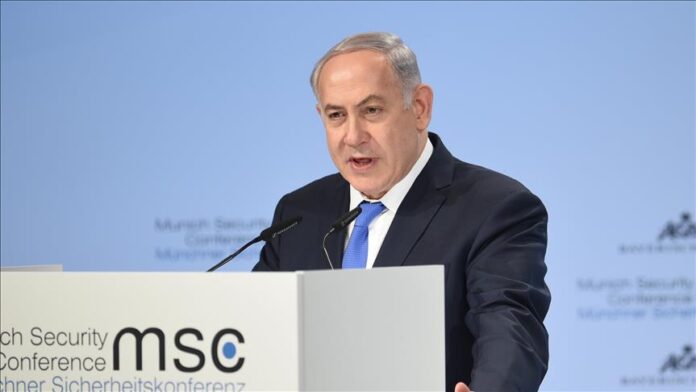 Although the Israeli regime, which is unable to even ensure its own security, seems unlikely to be able to harm Iran, the question remains why the Islamic Republic of Iran and its media do not react to Tel Aviv’s repeated and flagrant threats against Tehran, and do not pressure the countries and international organizations which slam Iran for boosting its defence power into taking a position against Israeli threats?

Israeli Prime Minister Benjamin Netanyahu made a controversial speech at the Munich security conference where he rehashed his threats and accusations against Iran. He said “Iran’s growing aggression in the region” as well as its “belligerent ambitions” in Syria must be tackled.

He also brandished what he claimed was part of an Iranian drone shot down by Tel Aviv recently.

“It sent a drone into Israeli territory, violating Israel’s sovereignty, threatening our security. We destroyed that drone and the control center that operated it from Syria,” the Israeli regime’s prime minister claimed.

He then overtly threatened to take military action against Iran.

“And we will act, if necessary, not just against Iran’s proxies that are attacking us, but against Iran itself … we are absolutely resolute in our determination to stop and roll back the aggression of Iran’s regime,” Netanyahu said brazenly.

The Israeli prime minister did not stop there, and went further to blatantly support the recent unrest in Iran triggered by instigators. He tried to create the impression that the rioters were simply people who were protesting against Iran’s economic and social situation.

He also tried to pretend that he was kind and friendly to the Iranian nation.

“We have no quarrel with the people of Iran, but we are absolutely resolute in our determination to stop and roll back the aggression of Iran’s regime,” said Netanyahu flagrantly.

The Israeli regime’s premier also lashed out at the JCPOA, and said the agreement has emboldened Iran.

“The nuclear agreement with Iran has begun the countdown to an Iranian nuclear arsenal in little more than a decade. And the sanction relief that the deal provided has not moderated Iran. […] In fact, it’s unleashed a dangerous Iranian tiger in our region and beyond,” Netanyahu said.

As it can be seen, Netanyahu’s speech was littered with threats and insults to Iran. However, it received no serious reaction from the Islamic Republic and other countries. It is high time for Iran to show the right reaction to Netanyahu’s threats and dealt with his anti-Tehran rhetoric.