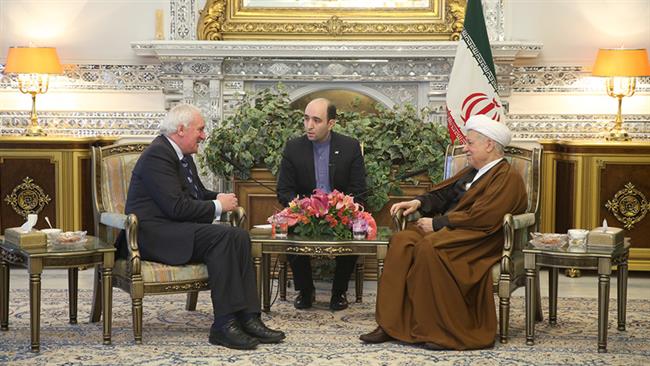 The chairman of Iran's Expediency Council has criticized Europe for following the US policies in imposing unfair sanctions against other countries.

“While economic problems have plagued many European countries, how can they justify their policy of following unsuccessful US programs?” said Ayatollah Akbar Hashemi Rafsanjani during his meeting with Ireland’s former prime minister, Bertie Ahern, in the Iranian capital city of Tehran on Tuesday.

He noted that the West’s sanctions against other countries have impacted detrimentally on the European economy, causing a massive economic slump.

Ayatollah Hashemi also blamed the West for lacking a strong will to solve the issue of Iran’s nuclear program.

“Iran is serious in negotiations and defending its nuclear rights. However, it seems there are some problems in the US that even sap the European countries’ will [in the nuclear talks],” he said.

Iran and the six world powers are in talks to secure a final full-blown deal over Tehran’s nuclear program.

Since an interim deal was agreed in Geneva in November 2013, the negotiating sides have missed two deadlines to ink a final agreement.

Rise of leftist parties in Europe

Ayatollah Hashemi also referred to the rising popularity of leftist parties in Europe which culminated in the victory of anti-austerity party Syriza in Greece’s parliamentary elections, saying the trend is the result of the European statesmen’s disregard of economic problems, especially the growing rate of unemployment.

“It is not far-fetched that Greece’s incident may permeate other countries as well,” he stated.

Syriza is a fierce opponent of Greece’s bailout deal with the International Monetary Fund and eurozone countries, and has vowed to reconsider the austerity measures that have caused mounting dissatisfaction in the country.

Tehran Keen to Expand Its Cooperation with Dublin: Zarif