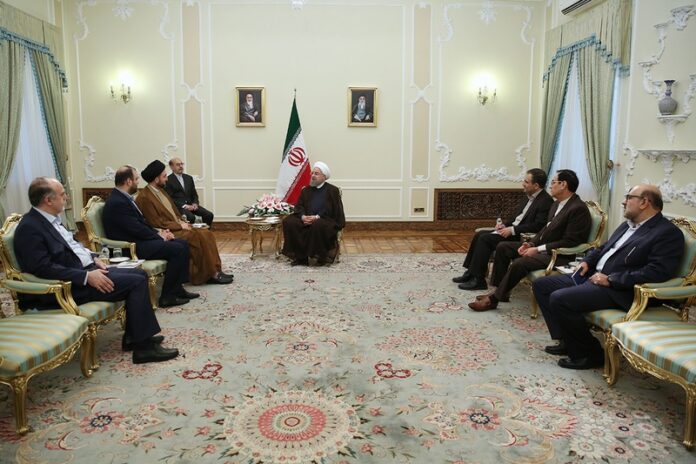 Iranian President Hassan Rouhani says the Islamic Republic will always stand by the Iraqi government and nation in the fight against terrorism and help protect the holy shrines in Iraq.

In a meeting with visiting Chairman of the Islamic Supreme Council of Iraq (ISCI) Ammar Hakim in Tehran on Monday, Rouhani praised as a very important achievement the recent victories of the Iraqi government and people against terrorists.

The Iranian president urged all people from all Iraqi political groups, faiths and ethnicities to maintain their unity and strengthen their national solidarity.

The Iraqi army, along with popular forces, has been engaged in operations to liberate militant-held regions.

Iraqi government forces on Saturday managed to fully retake a strategic airbase in the town of Qayyarah, located some 60 kilometers (40 miles) south of Mosul, from Daesh Takfiri terrorists.

Mosul, located about 360 kilometers (225 miles) northwest of Baghdad, fell to Daesh militants in June 2014, when the Takfiri terrorist group mounted an offensive in the Arab country and overran parts of Iraq in north and west.

The northern and western parts of Iraq have been plagued by gruesome violence ever since Daesh terrorists mounted an offensive in the country in June 2014. The militants have been committing vicious crimes against all ethnic and religious communities in Iraq, including Shias, Sunnis, Kurds, Christians and others.

Elsewhere, President Rouhani stressed the importance of expanding mutual relations between the two neighbors, saying, “The expansion, promotion and strengthening of Tehran-Baghdad ties will serve the interests of the people of the two countries as well as regional nations.”

The ISCI chairman, for his part, hailed Iran’s great role in the fight against terrorism in Iraq and said the recapture of Fallujah from Daesh Takfiri terrorists was the outcome of unity among Iraqi political and military groups and people.

Hakim emphasized that Iraqis would maintain their unity until the full eradication of terrorism across the country.