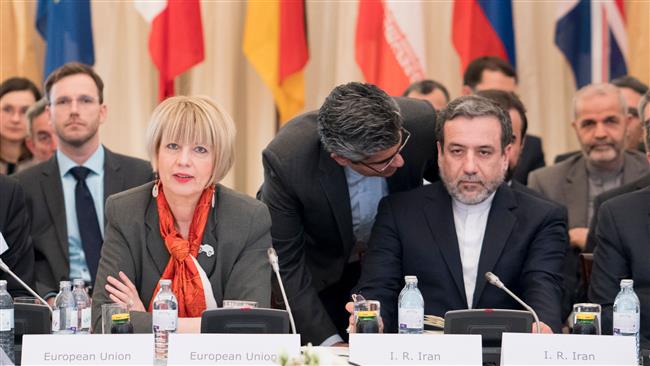 The seventh meeting of the Iran-P5+1 Joint Commission, which monitors the implementation of the 2015 nuclear deal between Iran and the P5+1 group of countries, has been convened in the Austrian capital of Vienna.

Iranian Deputy Foreign Ministers Abbas Araqchi and Majid Takht-e-Ravanchi, along with the Secretary General of the European External Action Service (EEAS) Helga Schmid, as well as senior diplomats from other P5+1 group of countries attended the meeting of the commission tasked with monitoring the implementation of the nuclear deal, known as the Joint Comprehensive Plan of Action (JCPOA).

One of the key issues that the participants were scheduled to discuss was Iran’s request to purchase 950 tonnes of concentrated uranium, also known as yellowcake, from Kazakhstan in a three-year period.

This is the first meeting of the commission since the inauguration of US President Donald Trump on January 20. The commission’s sixth meeting was held in Vienna on January 10 to discuss Washington’s extension of an anti-Iran sanctions law.

Last December, the US Congress voted to extend Iran Sanctions Act (ISA) for another 10 years. The law, which authorizes the US president to re-impose the bans, was first adopted in 1996 to punish investments in the Islamic Republic over its nuclear program and its support for anti-Israeli resistance groups.

Speaking after a meeting with IAEA Director General Yukiya Amano in Vienna on Monday, Araqchi said the Islamic Republic had lived up to its commitments under the JCPOA.

“As the entire world knows and repeated reports by the agency have confirmed, Iran has always been committed to its obligations and carefully implemented the JCPOA,” Araqchi, who is the Iranian head of the Joint Commission, said.

He, however, emphasized that the other side had not fully complied with its obligations under the JCPOA.

Iranian Foreign Minister Mohammad Javad Zarif on Friday slammed the United States for violating both the spirit and the letter of the nuclear deal.

“We’ll see if US is prepared to live up to letter of the JCPOA let alone [its] spirit. So far, it has defied both,” Zarif said on his official Twitter account.

Iran’s foreign minister made the comments after Trump accused Iran of “not living up to the spirit” of the 2015 nuclear agreement.

Iran and the five permanent members of the United Nations Security Council — the United States, Britain, France, China and Russia — plus Germany signed the JCPOA on July 14, 2015 and started implementing it on January 16, 2016.