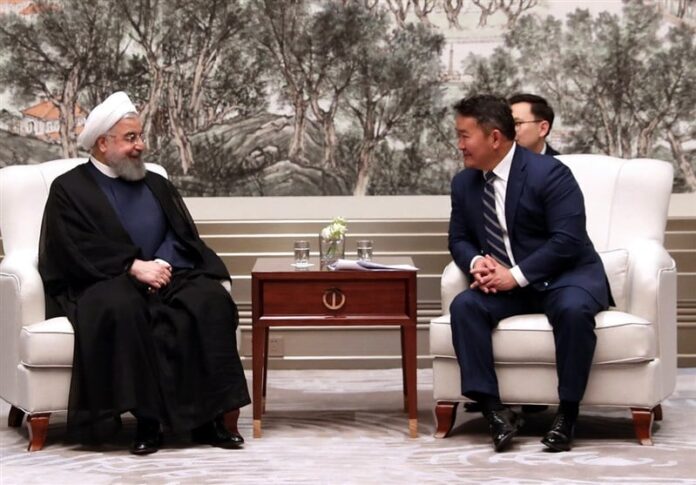 Iranian President Hassan Rouhani hailed the growing bilateral relations with Mongolia and said all potentials should be tapped to further boost the two countries’ ties in all areas.

“Tehran is ready to develop and strengthen its economic and trade ties with Mongolia, and all the capabilities and opportunities existing in the two countries should be used to deepen the bilateral relations,” Rouhani said at a Sunday meeting with his Mongolian counterpart, Khaltmaagiin Battulga, on the sidelines of the Shanghai Cooperation Organization (SCO) summit in China.

He further emphasized that closer economic cooperation between Tehran and Ulaanbaatar serves the interests of both nations, adding, “We encourage the Iranian private sector and businessmen to participate in Mongolia’s development projects.”

Battulga, for his part, hailed the relationship between the two countries as developing and said Ulaanbaatar is determined to strengthen its relations with Tehran in all fields, the economy in particular.

Heading a high-ranking delegation, Rouhani has traveled to Qingdao in China’s eastern province of Shandong to participate in the SCO summit at the official invitation of his Chinese counterpart, Xi Jinping.

The SCO was formed in 2001 in Shanghai by the leaders of Kazakhstan, China, Kyrgyzstan, Russia, Tajikistan, and Uzbekistan to curb extremism in the region and enhance border security.

The intergovernmental organization seeks to strengthen mutual trust and good-neighborly ties between the member countries, contribute to regional stability and facilitate cooperation in different sectors, including political, trade, economic and energy issues.