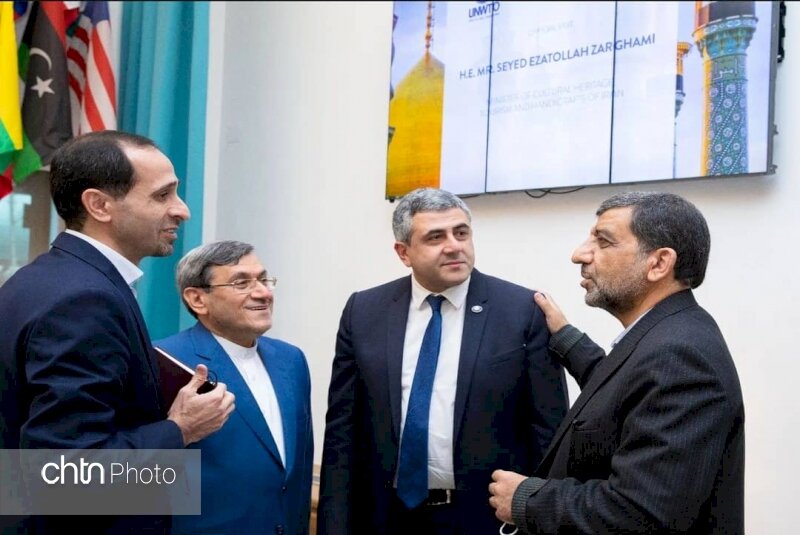 Tourism is the most effective factor in bringing nations together, Iranian tourism minister Ezzatollah Zarghami says, in a meeting with the Secretary General of the World Tourism Organization.

Direct communication between individuals eliminates many negative attitudes toward human relations and creates a firm foundation for friendship and optimism, the minister of Cultural Heritage, Tourism and Handicrafts said.

He made the remarks during a meeting with UNWTO Secretary-General Zurab Pololikashvili on the sidelines of Fitur 2022 in Madrid on Thursday.

“Tourism is the right of everyone in the world, and it is the most effective way in the convergence of nations of the world,” Zarghami added.

For his part, Pololikashvili stated that Iran is one of the main hubs for tourism in the world due to its multicultural nature, capabilities, and diversity in the field of tourism.

In terms of tourism and handicrafts, Iran can contribute to the World Tourism Organization’s goals and programs, he added.

Last week, the deputy tourism minister Ali Darabi announced that Iran needs to get ready for a probable “tsunami of tourism” once the coronavirus pandemic is over.

“The Iranian government should get fully prepared for a surge and potential tsunami of tourism when COVID-restrictions are over,” he said.

Travel and tourism will increase as vaccination becomes a priority around the world and lifestyles align, the official added.

Earlier this month, an official with the tourism ministry announced that the Iranian tourism industry has suffered $233m losses due to COVID restrictions over the past two years.

“Travel is not believed to be the cause of the outbreak, rather it is a lack of adherence to health protocols that have caused the outbreak, but people canceled their trips anyway, causing major damage to the tourist facilities across the country,” he explained.

With only two months until the upcoming new Iranian year holidays, the tourism ministry is preparing safe and smart travel packages for Iranian holidaymakers and travelers, he noted.

Nearly 70 percent of the population has been vaccinated, so these trips may be able to partially compensate for the damage done to tourism facilities over the past two years, he mentioned.

Last year the tourism ministry announced that the tourism of the country was growing before the corona outbreak, its revenues reached $11.7 billion in 2019, which accounted for 2.8% of GDP, nearing the average share of tourism in the world GDP, which was 3.2 percent.

Iran was ranked as the second fastest-growing country in tourism based on data compiled by the World Tourism Organization.

Experts expect Iran to achieve a tourism boom after coronavirus contained, believing its impact would be temporary and short-lived for a country that ranked the third fastest-growing tourism destination in 2019.

The Islamic Republic expects to reap a bonanza from its numerous tourist spots such as bazaars, museums, mosques, bridges, bathhouses, madrasas, mausoleums, churches, towers, and mansions, of which 26 are inscribed on the UNESCO World Heritage list. Under the 2025 Tourism Vision Plan, Iran aims to increase the number of tourist arrivals from 4.8 million in 2014 to 20 million in 2025.