Iran is ready to promote dialog with Spain: Speaker 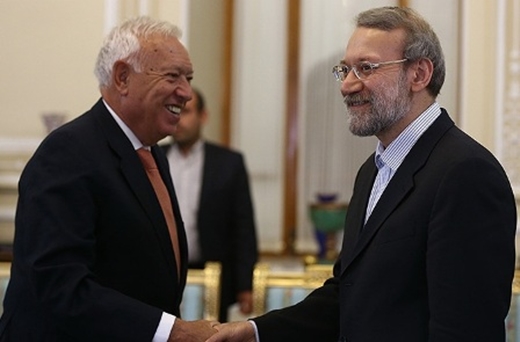 Larijani said both countries enjoy vast potential in the field of trade and economy.

Parliament Speaker Ali Larijani has said Iran is ready to increase its level of negotiations and cooperation with Spain.

He said Iranians do not regard Spain negatively and added, “This positive background can be employed to activate cooperation in all areas of mutual interest in an appropriate manner.”

Referring to the views of lawmakers as manifestation of people’s votes which can facilitate mutual understanding and promote relations between Iran and Spain, Larijani said both countries enjoy vast potential in the field of trade and economy.

The Spanish foreign minister said that his country has always welcomed cooperation with Iran and that in the wake of the nuclear agreement, the ground is ripe for advancement of ties.

He hailed the nuclear agreement between Iran and P5+1 reached in Vienna in July and said, it has made Iran’s role in the establishment of stability, peace and tranquility in the region more significant.

“Spain is trying to be among the first European countries to put in operation its cooperation with Iran when sanctions are lifted,” he said.

On activity of terrorist groups in Syria, he said the Spanish government believes there is a diplomatic solution to the Syrian crisis which should be terminated through democratic procedures.

In other developments, Spanish Minister of Industry, Energy and Tourism Jose Manuel Soria met Iranian Energy Minister Hamid Chitchian. At the meeting the Spanish minister expressed Madrid’s readiness for production and distribution of electricity in Iran.