Iran, Iraq Vow to Work Together against Possible War 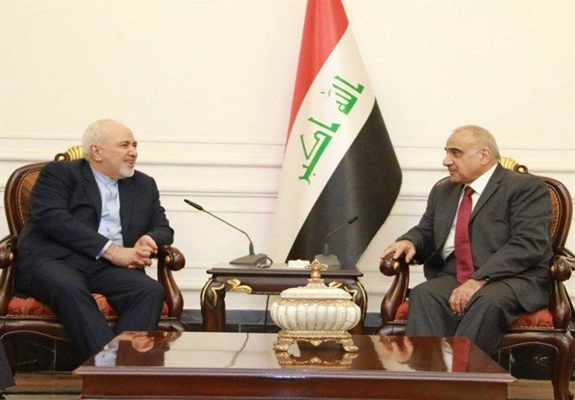 Tehran and Baghdad have expressed their determination to work together to stave off a war that could imperil stability in the Middle East.

That was announced that in a meeting between Iranian Foreign Minister Mohammad Javad Zarif and Iraqi Prime Minister Adil Abdul-Mahdi in Baghdad on Saturday, May 5, 2019.

During their talks, the two officials discussed the recent regional developments, including those surrounding the Iran nuclear deal known as the Joint Comprehensive Plan of Action (JCPOA).

The two sides underscored that the international agreement should be preserved despite the United States’ unilateral withdrawal from the accord.

Abdul-Mahdi and Zarif reiterated that both Iran and Iraq have been affected by US sanctions on Tehran, which went into force following Washington’s pullout from the JCPOA last year.

He stressed that a potential military conflict between the US and Iran over the issue could have far-reaching consequences for the entire Middle East region.

Both officials stressed the need for Tehran and Baghdad to step up security cooperation to defuse the current tensions and reinforce regional stability.

The Al Jazeera Network said Zarif’s trip comes against the backdrop of tensions between Iran and the United States. It said key regional challenges as well as reciprocal ties were discussed in the meeting.

The Alaraby Aljadeed website (www.alaraby.co.uk) also touched on the meeting, saying Iran-US tensions, their consequences and ways of easing those tensions are being discussed during the talks.

The Rusia Alyoum TV also covered the top Iranian diplomat’s visit to Iraq. It reported that Zarif has made trips to the Asian countries of Turkmenistan, India, Japan and China since May 12, 2019 in order to review ways of boosting mutual ties and exchange views on regional and international issues, particularly the JCPOA and growing tensions between Iran and the United States.

Sputnik wrote that Zarif and Abdul-Mahdi discussed ways of settling the crisis between Tehran and Washington.

Lebanon 24 also covered Zarif’s trip to Baghdad and his meetings with Iraqi authorities as well as the objectives of the visit.

Iran’s foreign minister arrived in the Iraqi capital Baghdad on a two-day official visit on Saturday, heading a high-ranking delegation.

On the first day of his trip, he held separate meetings with President Barham Salih, Prime Minister Adel Abdul-Mahdi and Parliament Speaker Salim al-Jabouri. They discussed mutual relations together with regional and international issues.

Zarif also sat down with his Iraqi counterpart Mohamed al-Hakim on Sunday.

Zarif’s third trip to Baghdad in the past few months comes at a time when Washington have been engaged in provocative moves, fueling tensions in the region and launching propaganda campaigns in some Arab countries with regards to growing threats and insecurity in Iraq.