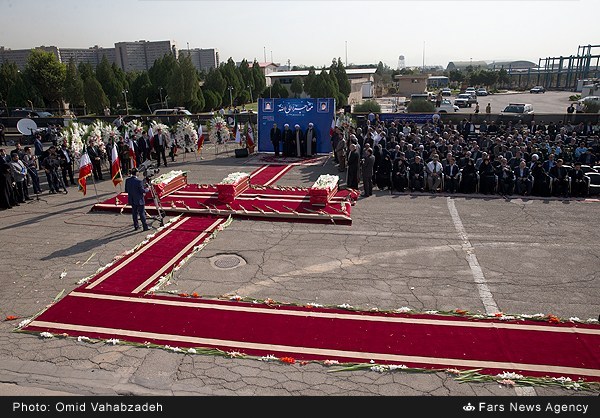 President Rouhani along with a number of senior officials has attended the ceremony to pay tribute to the Iranian pilgrims who lost their lives in the Mina tragedy.

Iran is holding an official ceremony to welcome the bodies of 104 Iranian Hajj pilgrims who were killed in the recent crush in Mina, near the holy city of Mecca in Saudi Arabia.

President Rouhani is addressing the ceremony at Tehran Mehrabad Airport on Saturday.

Senior Iranian officials including Parliament Speaker Ali Larijani, Judiciary Chief Ayatollah Sadegh Amoli Larijani, Ayatollah Mohammad Mohammadi Golpayegani, the head of the office of Leader of the Islamic Revolution Ayatollah Seyyed Ali Khamenei, members of the Cabinet and a number of lawmakers are also present at the ceremony.

The crush occurred on September 24 after two large masses of pilgrims fused together.

Saudi Arabia claims nearly 770 people were killed in the calamity, but officials with Iran’s Hajj and Pilgrimage Organization say about 4,700 people, including 464 Iranians, lost their lives in the tragedy.