Iranian Food Packs Handed Out among Palestinians at Al-Aqsa Mosque 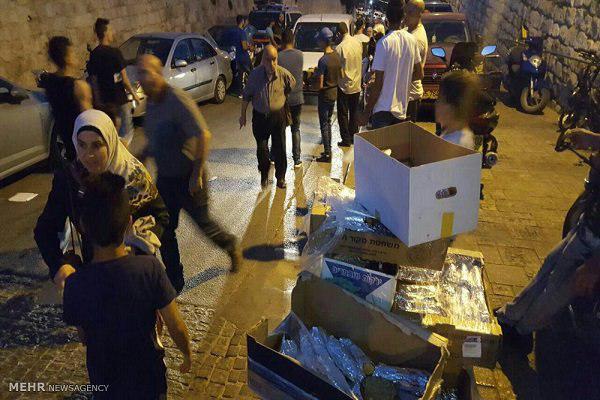 Food packs dispatched by Iran have been distributed among Palestinians at al-Aqsa mosque amid tight security measures.

Food packs have been distributed among Palestinians at al-Aqsa mosque despite efforts by the Israeli forces to keep the packs from being handed out.

To celebrate the breaking of the siege of the al-Aqsa mosque in Jerusalem al-Quds, the Palestinian members of an NGO called Justice for Peace distributed food packs provided by Iranian youths. The packs were handed out among hundreds of Palestinians who had been on a sit-in outside the al-Aqsa mosque for two weeks to defend the Muslims’ holy site.

A sentence by Leader of Iran’s Islamic Revolution Ayatollah Seyyed Ali Khamenei was written on the packs. It read “the divine destiny is that occupied Palestine will be liberated” as well as “al-Quds is ours.” The packs were distributed amid tight security measures, pressure by Israeli intelligence services and the Israeli forces’ siege of al-Quds.

Mohammad Asghari, the spokesman for Justice for Peace, touched upon Tel Aviv’s unprecedented disrespect for al-Quds. He said distribution of food packs showed Iranians support the Palestinians’ popular resistance and are standing by the freedom-seekers defending the al-Aqsa mosque.

He said the food packs were provided by some families of those martyred while defending holy sites as well as youths advocating the cause of Palestine. He said the move was in solidarity with Palestinians who had been on a sit-in outside the mosque despite tight security measures to defend the holy site.

He said Israeli security forces did not allow the packs to be handed out while some of the distributors were arrested. However, he added, the food packs were finally distributed outside one of the mosque’s gates as a sign of the Iranian youths’ solidarity with Palestinians.

The al-Aqsa mosque had been under siege by Israeli forces since mid-July. Dozens of people who had come to defend the holy site had been killed or wounded by Israeli forces. Finally, the siege was broken on July 28 on the back of efforts by Palestinians.