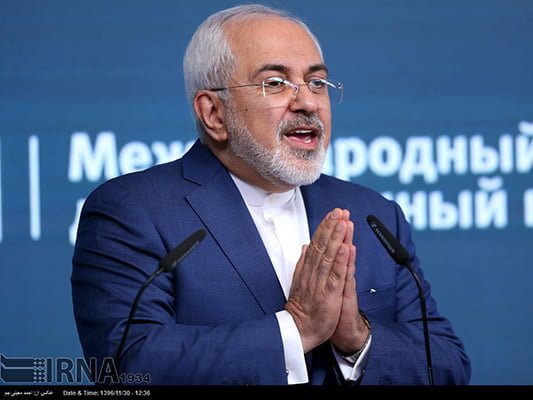 Iranian Foreign Minister Mohammad Javad Zarif has called on the Persian Gulf states to work for the realization of “a historic paradigm shift” in the region through confidence-building measures.

Addressing the annual Valdai Club Conference in Moscow on Monday, Zarif said the Islamic Republic recognizes “that we need confidence-building measures in the Persian Gulf: from joint military visits to pre-notification of military exercises; and from transparency measures in armament procurements to reducing military expenditures.”

He said all of these measures “could eventually lead to a regional non-aggression pact.”

“We can begin with easier to implement issues such as the promotion of tourism, joint investments, or even joint task forces on issues ranging from nuclear safety to pollution to disaster management,” he added.

What follows is the full text of his speech at the annual conference, which was also attended by prominent politicians, diplomats, scholars and public figures from more than 30 countries:

In the Name of God, the Compassionate the Merciful

Let me begin by thanking Professors Bystritskiy, Lukyanov and Naumkin for organizing this discussion forum and giving me the opportunity to take part. It is a great pleasure for me to be here with my friend, Minister Sergei Lavrov to exchange views and discuss difficult issues we all face at this critical juncture in West Asia. In the fight against extremism and dealing with the complex military and political environment in our wider region, our growing, strategic partnership with the Russian Federation, which stems from our common principles, interests and concerns, has been an important contributor to regional situation.

In my view, the major issues which demand our attention and require urgent solution, are seven-fold:

Frist, despite the territorial defeat of Daesh and some other terrorist groups, and their eviction from much of the land in Iraq and Syria that they had occupied, we believe that we are still vulnerable to the formidable challenge presented by extremism. The heads and operatives of Daesh are at large with formidable weapons and hundreds of millions of dollars of stolen money. They have either returned to their insurgent and terrorist roots or joined sleeper sells.

Their networks are almost intact, and their hate ideology still being spread, by the same petrodollars.

The offshoots Daesh planted in the wider region from Libya to Afghanistan, including in northern Afghanistan on your and our doorstep, are death machines on rampage.

With such capacity still preserved, they look for new breeding grounds. And we must join together to deny them such fertile environments by addressing current crises and issues at hand.

Fighting extremism has undoubtedly a domestic component. Reducing its appeal requires promoting good governance, upholding the rule of law, eliminating corruption, rebuilding the social compact, and reducing poverty and social inequalities; as well as measures that can help prevent real or perceived marginalization and exclusion. The chronic failure of some States to satisfy the minimum demands of their populace for dignity has undermined their effectiveness and created widening social gaps for extremism to exploit.

Second, Syria continues to be the focus of attention in West Asia and beyond. For the past 4 years, Iran and Russia have both insisted that the Syrian crisis could only be resolved politically by Syrians themselves. Our joint efforts to defeat Daesh, and the cooperation between Russia, Iran and Turkey to reduce hostilities and start the political process in Sochi represent the sound forward strategy.

However, a new wave of foreign intervention, in defiance of international law, has become the major impediment in the way of stabilizing the country and threatening to further escalate and create even more permanent social and ethnic divisions.

The US announcement that it will maintain a military presence on Syrian soil and create a militia there constitutes flagrant aggression under international law. It emanates from an ill-conceived obsession coupled with impulsive uncalculated reaction with far reaching local, national and regional ramifications.

So is the almost routine violations of Syrian airspace and air raids by Israel in the past several years, which grabbed international attention only after the Syrian military was able to break the myth of invincibility of Israeli military by downing an F-16 on 10 February.

The attack on 7 February by the US against a Syrian contingent demonstrated that the US is now pursuing a short-sighted and mostly profiteering geo-economic agenda that has nothing to do with fighting terrorism.

If this dangerous policy continues, not only extremism stands to benefit enormously but also the risk of a conflagration in Syria will become ever more serious.

At the same time, while we understand the concerns of our Turkish neighbors about new US adventurism, we are confident that there are appropriate and lawful ways of addressing those concerns through the Syrian government. The current military operation doesn’t help the cause of stabilizing Syria, nor is it in the interest of peace and stability in the whole region. It is important that all parties avoid situations that inherently increase the probability of more clashes.

Third, the impulsive US occupation of parts of Syria directly and through hastily-founded proxies is a major impediment to the political recovery and rebuilding efforts in that country that also adversely affect the reconstruction of Iraq; moves that are important prerequisite for the political stabilization of the whole region. We believe that the international community needs to attach sufficient attention to the rebuilding of all war-stricken parts of the region as it helps bar the regrouping and recruiting attempts of routed terrorist groups and neutralize the impact of their hate ideology on the population. It is also a moral requirement as we are all indebted to the Iraqi and Syrian peoples for the frontline combat they mounted against extremism on behalf of the whole world.

Fourth, the national cohesion and territorial integrity of Syria and Iraq should top our list of priorities. Ethnic restiveness in Syria and Iraq, tainted with secessionism, constitutes a threat to the whole region and beyond. This is an issue that national and local authorities and all relevant States must address prudently through dialogue and on the basis of national sovereignty, territorial integrity and national constitutions, trying to turn ethnic tension into cooperation and convergence.

Along the same line, it is imperative to restore respect for national frontiers and the nation-state system, both of which have been undermined by terrorist groups and their Takfiri ideology.

Fifth, the Palestinian question, with occupation at its root, remains the most critical issue facing the region and the whole world. The injustice done to and atrocities committed against the Palestinian people in the past 70 years have created a deep-seated sense of anger, resentment and powerlessness in the Islamic world. The recognition by the US president of Al-Quds as the capital of Israel amounted to offering by Trump of what he does not own to those who have no right to it. As such it had no legal or political value but offered a new boost for the recruiting attempts by extremists.

Six, the aggression and indiscriminate airstrikes against the Yemeni people, which was delusionally perceived to achieve a military victory within weeks, is now entering its fourth year. It is another source of tension in the region and another breeding ground for extremists that requires immediate attention. Three years of senseless bombing campaign have made clear that it is a strategic failure with no military solution. Thus, we must encourage an immediate ceasefire and urgent humanitarian relief coupled with urgent national dialogue among Yemeni parties for the establishment of an inclusive government.

Seven, the campaign by the US and its regional clients to distract attention from the real problems by blaming Iran for their own endemic bad choices will certainly not resolve their problems or compensate for their persistent mistakes.

We in Iran believe that nothing can be gained from remaining prisoners of the past and perpetuating the old paradigm of purchasing security, bloc formations and alliances. For many years, we have insisted on searching for political solutions to the crises in Syria and Yemen. Focusing on our immediate volatile neighborhood of the littoral states of the Persian Gulf, we have proposed a Regional Dialogue Forum to move away from decades of war and conflict and forge a different future for our region. We believe two fundamental concepts – that I underlined yesterday at the Munich Security Conference – are essential in this journey. First, our neighbors in the Persian Gulf should join Iran in recognizing that we should strive for a “strong region” in the Persian Gulf rather than a “strong-man in the region”. The era of regional and global hegemony is long gone, and hegemonic tendencies only lead to insecurity and instability.

Secondly, we must all abandon the illusion that security can be bought from outside or achieved at the expense of insecurity of others. We need to move away from the defunct concept of coalitions and alliances which rest on the premise of attaining security through exclusion of and insecurity for others. We also need to address the fact of power and size disparities as well as divergence of interests. That is why we need new innovative concepts that are inclusive and non-zero-sum. Regional security networking is one way forward. It allows for small and large nations to contribute to a regional security architecture which promotes security for all. In order to enter this architecture, Persian Gulf states simply need to adhere to common norms and principles, such as sovereign equality of states; refraining from the threat or use of force; peaceful resolution of conflicts; respect for the territorial integrity; inviolability of borders; non-intervention in the domestic affairs of states; and respect for self-determination within states.

We also recognize that we need confidence-building measures in the Persian Gulf: from joint military visits to pre-notification of military exercises; and from transparency measures in armament procurements to reducing military expenditures; all of which could eventually lead to a regional non-aggression pact. We can begin with easier to implement issues such as the promotion of tourism, joint investments, or even joint task forces on issues ranging from nuclear safety to pollution to disaster management.

With Russia’s sober strategic perspective and growing influence in the region, it can play an instrumental role to make such a historic paradigm shift in the Persian Gulf a reality.