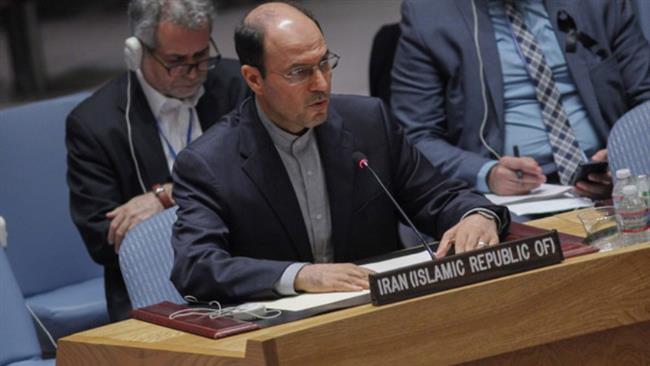 Iran says a comprehensive, binding, irreversible and verifiable treaty is needed to effectively and practically get rid of nuclear weapons.

Iran has criticized the five nuclear weapons states for failing to take concrete measures to eliminate their stockpiles, urging a deadline for nuclear disarmament across the world.

Addressing the UN Disarmament Commission on Wednesday, Iran’s Deputy Ambassador to the UN Gholam Hossein Dehghani called on the nuclear powers – the United States, Britain, Russia, France and China — to engage in negotiations on a treaty to achieve nuclear disarmament by a target date.

He emphasized that “a comprehensive, binding, irreversible and verifiable” treaty is the most effective and practical way to get rid of nuclear weapons.

The five nuclear powers have promised to disarm their nukes, but have so far failed to make any significant progress, the Iranian envoy said.

As a non-nuclear weapon country and a signatory to the Non-Proliferation Treaty (NPT), Iran believes that the time is ripe for ending the incremental approach toward disarmament and opening negotiations with all nuclear and non-nuclear weapon states on a convention that would set a deadline for global disarmament, Dehghani pointed out.

The commission, comprising all 193 UN member states, is supposed to make recommendations on disarmament, but has failed to make substantive proposals in the past decade.

Some nuclear weapons states, including the United States, have launched a program to modernize their nuclear bombs despite promises to disarm.

Dehghani’s remarks came after Iran and the five permanent members of the UN Security Council plus Germany reached a mutual understanding over Tehran’s nuclear program in the Swiss city of Lausanne on April 2 after eight days of marathon talks.

Iran and its negotiating partners are now expected to start work to draw up a final comprehensive deal over the Islamic Republic’s nuclear program by the end of the self-designated June 30 deadline.

Iran has repeatedly dismissed allegations that its nuclear program pursues military objectives and argued that as a committed signatory to the NPT and a member of the International Atomic Energy Agency (IAEA), it has the right to use nuclear technology for peaceful purposes.