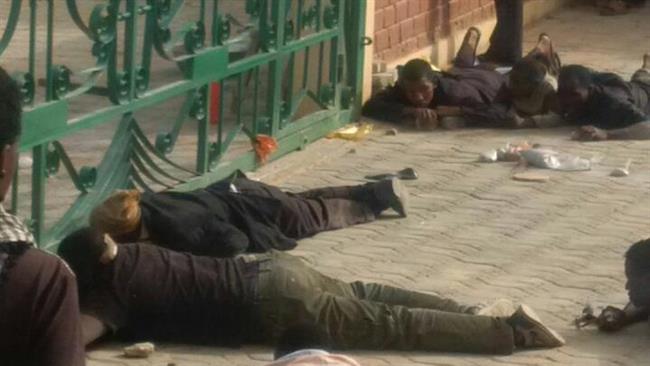 Iranian Foreign Ministry says Iran hopes that preservation of calm and national unity in Nigeria in battling terrorism is prioritized while rash and unconstructive measures are avoided.

Iran has called on Nigerian authorities to respect religious figures and sites following two days of deadly persecution against the country’s Shia Muslims.

“Nigeria… is now dealing with problems arising from extremism and Takfiri terrorism and we hope that in these conditions preservation of calm and national unity in battling terrorism is prioritized while rash and unconstructive measures are avoided,” IRNA quoted Iran’s Foreign Ministry Spokesman Hossein Jaber-Ansari as saying on Sunday.

Jaber-Ansari expressed sorrow over the recent bloody clashes, which broke out between Muslim worshipers and government troops earlier in the day.

Nigerian forces raided the home of the leader of the Islamic Movement of Nigeria, Ibrahim al-Zakzaky, and arrested him after reportedly killing several of those protecting him including one of the group’s senior leaders and its spokesman.

Since their arrest, the fate of Zakzaky and his wife remains unknown

The developments followed the Saturday clashes between troops and Shia Muslims in the country’s city of Zaria, in Kaduna state, in which at least 15 people were killed and many more injured.

Reports said soldiers opened fire on the people attending a ceremony in Hussainiyyah Bagheeyatullah, a religious center in the northern city. The Shias had reportedly stopped the convoy of the Nigeria’s Chief of Army Staff, Lieutenant General Tukur Yusuf Buratai as the top Shia cleric was planning a speech in the religious center.