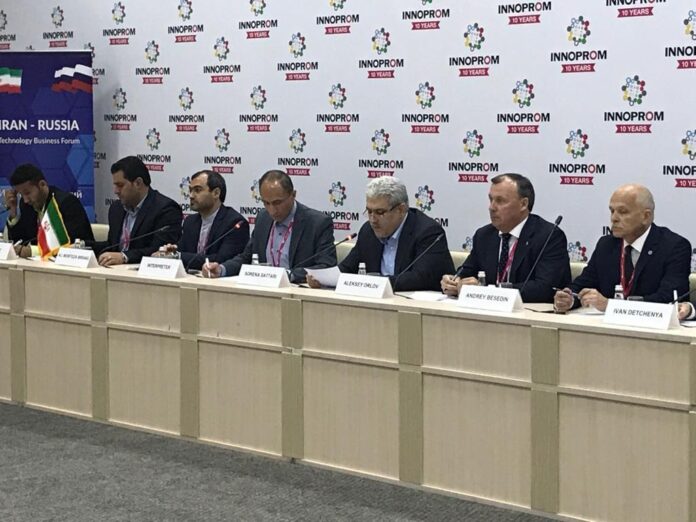 An Iranian official has expressed Tehran’s preparedness to establish a joint fund with the Russian Federation in order to finance mutual scientific and technological cooperation.

During his trip, the top Iranian official visited the International Industrial Trade Fair INNOPROM 2019 and saw for himself the latest accomplishments displayed by different companies at the event.

During the visit, he was accompanied by Ali Vahdat, the chairman of the board of Iran National Innovation Fund.

A joint Iran-Russia trade-technology meeting was held on the sidelines of the meeting, where Vahdat delivered a lecture on the achievements of Iranian knowledge-based companies.

In his speech, he said there are different tools to boost and finance technological cooperation between the two countries.

“Hence, we have made our presence felt with a whole range of financing instruments from funding to investment as well as trade services,” he said.

“So, we are prepared to help establish a joint fund or joint funds between the two countries in order to finance technological cooperation,” the Iranian vice president said.

“If our Russian counterparts are interested, we are also ready to establish a joint credit line to facilitate and support mutual technological cooperation,” he added.

A high-ranking Iranian scientific-cultural delegation led by Sattari accompanied by representatives from 70 Iranian knowledge-based companies is on a four-day visit to Russia.

The trip is supported by the International Transactions Center of the Science and Technology Department of the Iranian Presidential Office as well as the Innovation and Development Fund coinciding with Russia’s International Industrial Trade Fair INNOPROM 2019. The representatives of knowledge-based companies from both countries are meeting their counterparts in Moscow and Yekaterinburg. Representatives from the Foreign Ministry and the Innovation and Development Fund are accompanying Sattari during his trip.