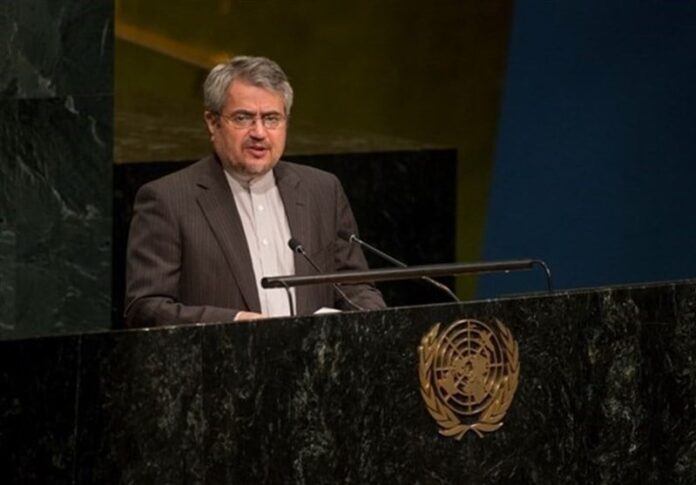 Iran’s ambassador to the United Nations slammed the US government for the lack of commitment to the Treaty on the Non-Proliferation of Nuclear Weapons (NPT).

Addressing the United Nations Disarmament Commission in New York on April 2, Gholam Ali Khoshroo denounced the US government for failing to honor its NPT commitments.

“The statement by a certain nuclear-weapon State that it wants more nuclear weapons to remain at the ‘top of the pack’ indicates that such extremely irresponsible policies will continue,” the Iranian envoy deplored.

In February 2017, US President Donald Trump expressed a desire for America to be an unparalleled military power, saying he wants to build up the US nuclear arsenal to make it “top of the pack.”

The following is the full text of Khoshroo’s comments:

I would like to begin by congratulating you and other bureau members on your election. I also assure you of the full support and cooperation of my delegation.

Likewise, I associate myself with the NAM statement delivered by Indonesia.

This cycle of the Disarmament Commission begins at a time when we are faced with two alarming trends: New nuclear arms race and new nuclear arms modernization race. To prevent further detrimental effects of these trends on the international peace and security, they need to come to an end.

We should not allow the monstrous shadow of the threat of these inhumane weapons on our life to continue indefinitely. We should consume them all before they consume us all. This indeed is our collective responsibility, as it relates to security of each and every one of us.

However, it is obvious that the Nuclear-Weapon States have a particular and heavier responsibility. Besides legal obligation, they have ethical and moral responsibility too. They cannot and should not continue to stubbornly insist on such obscured and unrealistic strategies as deterrence. They cannot seek their security at the price of insecurity of others.

Non-compliance of these States with their explicit legal obligations and unequivocal commitments to eliminate all their nuclear weapon arsenals have clearly proved the lack of their genuine political will in fulfilling their obligations.

The statement by a certain nuclear-weapon State that it wants more nuclear weapons to remain at the “top of the pack” indicates that such extremely irresponsible policies will continue.

Consequently, we need to redouble our efforts in confronting such bullying policies. While the adoption of the Treaty on the Prohibition of Nuclear Weapons in 2017 was a step forward in this direction, we should continue our strong call for the early commencement of negotiations in the Conference on Disarmament on a Comprehensive Nuclear Weapons Convention.

Against this backdrop, efforts in current cycle of the Commission should be focused on adopting recommendations on nuclear disarmament and non-proliferation of nuclear weapons.

This of course should be complemented by our efforts in pursuing the second agenda item of the Commission that is related to preventing an arms race in outer space.

To ensure that, as the common heritage and province of all mankind, outer space is explored and utilized exclusively for peaceful purposes, preventing an arms race therein is a must not an option.

In any case, the work of the Commission should be guided by the urgency, high priority and prime importance of realizing a nuclear-weapon-free world.

We attach great importance to this issue in the Middle East, where decades long regional and international efforts to establish a nuclear-weapon-free zone, proposed by Iran in 1974, is impeded so far by the stubborn objection of the Israeli regime.

Therefore, compelling Israel to join the non-proliferation treaty without any condition and as a non-nuclear weapon party, and to place all its nuclear facilities and activities under the IAEA comprehensive safeguards, should be an important element of the relevant recommendations of the Commission.

Recalling the strong calls for the full implementation of the Joint Comprehensive Plan of Action (JCPOA) by all its participants, I wish to stress that it definitely is essential for its continued relevance and continuity.

On its part, and as verified and confirmed by the IAEA, reflected in its 10 consecutive reports to date, Iran has fully implemented all its nuclear related commitments under the JCPOA.

However, the current irresponsible and destructive approach, policy and practice of the US regarding the JCPOA has seriously challenged its continuity. US actions are in contradiction with the letter, spirit and intent of the JCPOA, particularly its paragraphs 26, 28 and 29, through which, it is firmly committed, inter alia, to “make best efforts in good faith to sustain this JCPOA and to prevent interference with the realization of the full benefit by Iran of the sanctions lifting”; to “make every effort to support the successful implementation of this JCPOA including in their public statements”; and to “refrain from any policy specifically intended to directly and adversely affect the normalization of trade and economic relations with Iran inconsistent with their commitments not to undermine the successful implementation of this JCPOA.”

As we have stated time and again, the JCPOA is not a one-sided road. Therefore, implementation by Iran of its commitments could continue only if all other parties continue implementing their commitments fully, effectively and unconditionally. It is obvious that Iran will react proportionately to any continued significant non-implementation of the JCPOA commitments by one of its participants.

I have to stress that the JCPOA cannot be renegotiated or altered. IAEA is the sole authority to verify Iran’s commitment under the JCPOA. Iran continues to provisionally apply the Additional Protocol to its Safeguards Agreement and according to the latest IAEA report, the Agency “has conducted complementary accesses under the Additional Protocol to all the sites and locations in Iran which it needed to visit.”

Continuation of this situation is dependent on the continued unconditional implementation of the JCPOA by other parties, in particular the US. Iran cannot and will not continue to save the JCPOA at any cost. Definitely, it is undoable.

The international community should not allow the US administration to continue to mock and undermine the JCPOA. It is not in the interest of multilateralism and to prevent it is a collective responsibility.

I thank you Madam Chair.