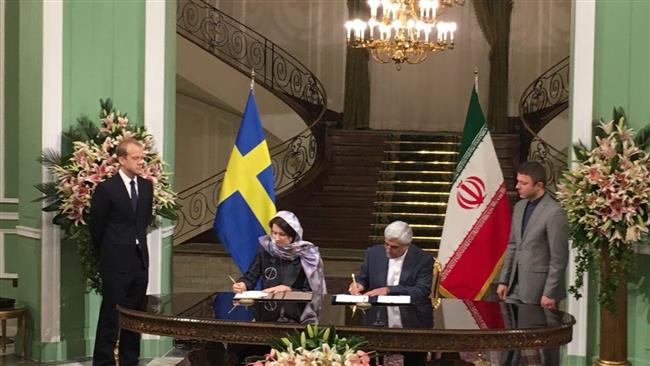 Iran and Sweden have signed five documents of cooperation in various areas during a visit by the Swedish prime minister to Iran.

The documents were signed between the concerned Iranian and Swedish officials in the presence of the visiting Swedish Prime Minister Stefan Löfven and Iranian President Hassan Rouhani in Tehran on Saturday.

Löfven had been officially welcomed by the Iranian chief executive earlier in the day. He is in the Islamic Republic at the head of a high-ranking political and economic delegation on a three-day visit.

The documents enabled cooperation in the areas of innovation and technology, higher education and research, road construction, communication and information technology, and family and women’s affairs.

Upon the conclusion of the event, the Iranian president and the Swedish prime minister attended a press conference.

President Rouhani said, “The visit by the Swedish prime minister and a ranking delegation [to Iran] signifies the two countries’ serious will to develop bilateral ties and consult toward the reduction of tensions in the region as well as international peace and stability.”

The countries are determined to have the level of bilateral ties returned to the pre-sanctions era, he said.

Elsewhere in his remarks, the Iranian president said the European Union (EU) should fully support European firms and banks so that the opportunities that have been created as a result of a nuclear deal between Iran and six other countries can be tapped in the best possible way.

The nuclear deal, called the Joint Comprehensive Plan of Action (JCPOA), was signed in 2015 between Iran and the P5+1 group of countries, namely the US, the UK, France, Russia, China, and Germany. It lifted nuclear-related sanctions on Iran, offering big opportunities for foreign businesses.

Rouhani also hailed Sweden’s “moderate” approach vis-à-vis Iran, which he said was maintained even when Tehran was under sanctions over its nuclear work.

Löfven, for his part, stressed the historic nature of his visit, of which he said he was “very proud.”

He added that the ranking of his accompanying delegation indicated the importance his country attached to Iran and to relations with the Islamic Republic. He also announced that his visit was to be followed by several more high-level trips by Swedish officials to Iran.