Iran and Lithuania Opt for Broadening of Bilateral Ties 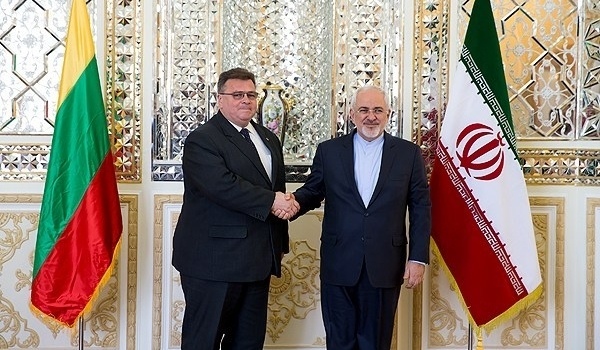 Iranian Foreign Minister Mohammad Javad Zarif and his Lithuanian counterpart Linas Linkevicius underlined the need for the expansion of mutual cooperation in different areas in a meeting in Tehran on Saturday May 28.

During the meeting in the Iranian capital, Zarif and Linkevicius explored avenues for bolstering and reinvigorating bilateral ties in political and economic fields. The Iranian and Lithuanian foreign ministers also discussed regional and international developments.

Also on the agenda of his three-day visit are meetings with ministers for energy and agriculture and parliamentary leaders, and attending a Lithuanian business seminar organized jointly with Iran’s Chamber of Commerce, Industries, Mines and Agriculture.

The Lithuanian Foreign Minister is accompanied by Deputy Energy Minister Aleksandras Spruogis and a business delegation led by Head of the Association of Lithuanian Chambers of Commerce, Industry and Crafts Rimantas Sidlauskas.

Linkevicius and other members of the delegation will discuss the strengthening of bilateral cooperation, particularly in economic, trade, and cultural fields, and will present Lithuania’s business and export potential.

An economic cooperation agreement and a memorandum of understanding between the Foreign Ministries will be signed. The two countries established diplomatic relations back in 1993.