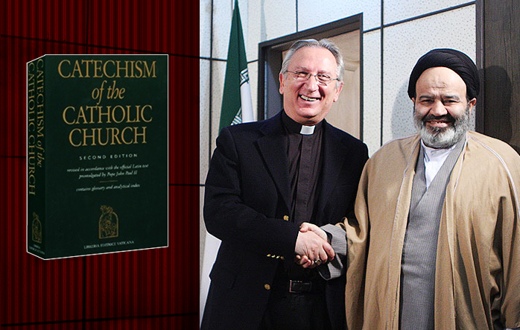 A book review session in Tehran has underlined that interfaith dialogue should be revived at a time when the world is reeling from the blows of war, hatred and violence.

Proximity of religions and interfaith dialogue are among issues which are widely discussed in religious and scientific circles. Religious researchers and scholars put pen to paper to speak their mind about different denominations and religious approaches.

The Publishing House of the University of Religions and Denominations (URD) in Qom is a major player in this regard. A translation of The Catechism of the Catholic Church – a 1992 book written in French by Cardinal Joseph Ratzinger by order of Pope John Paul II – is one of the most recent books the university press has released. The book, which is the essence of the written heritage of church traditions, makes references to the Scriptures and many other sources.

As its name suggests The Catechism of the Catholic Church is the Catholic Church’s reference book on ideological questions and religious-ethical traditions. This book is the official text for church teachings and is based on Scripture, church traditions, [the views of] Church Fathers, and the church educational authority. It has been translated into Farsi by Ahmad Reza Meftah, Hossein Soleimani and Hassan Ghanbari.

On February 2, Ettela’at newspaper filed a report on a review session of the book in which the Vatican Ambassador to Tehran Leo Boccardi, Hojjat-ol-Islam Abolhassan Navvab, the head of the University of Religions and Islamic Denominations, and the book’s translators discussed different aspects of The Catechism of the Catholic Church. The following is a partial translation of who said what in the session:

Ali-Asghar Mohammadkhani, the deputy director for cultural affairs at Book City [a bookshop chain], said that the release of the book sets the stage for a dialogue between Islam and Christianity and added, “We’re happy that many researchers and thinkers in Iran and in Western countries seek interfaith dialogue, and to that end hold talks with each other in a scholarly and friendly atmosphere.

“At a time when some in the world go to extremes, either by resorting to extremism or by trying to eliminate religion, we have a responsibility to promote rationalism, peace and moderation as the true messages of religions.”

The Vatican Ambassador to Tehran Leo Boccardi said, “The Farsi version of The Catechism of the Catholic Church was unveiled on January 12 at the Pontifical Gregorian University in Rome with Iranian thinkers and scientists as well as the dean of the university and representatives from the Vatican in attendance.

“Prominent scholars have said what is there to say about the book; as the Vatican’s ambassador, what can I add to what was said? First, I would like to thank the translators for 12 years of constant, serious work on the book. The book’s new, accurate translation is a success, not only from a linguistic point of view but also for conveying the theme. I assure you that the translation of such a book is by no means an easy job.

“It is commonly said that no translation can exactly match the original text, but in this case I can firmly say that The Catechism of the Catholic Church has been translated carefully in terms of diction and meaning and does not need correction or re-editing. On a scale of one to 10, I proudly give ten to the book’s translators, editor and publisher for its precious print, fluency and reasonable price.”

Ambassador Boccardi further said, “Is this book merely for your library? The answer is No. Such a thing would be a serious blow to what has been done for the book which is a valuable source for reference, research, dialogue and understanding. It is necessary for those who are involved in interfaith dialogue [to read it].

“The other day Supreme Leader Ayatollah Khamenei called on the youth around the world to learn about Islam [firsthand]. Hereby, I invite the Iranian youth to study and do research on The Catechism of the Catholic Church.

“To know about the other party is a prelude to dialogue. We cannot have dialogue with those we do not know. This book provides a good opportunity for Muslim and Christian students, teachers and religious people to learn more about the Christian faith and common biases, and overcome the prejudices which insult human’s rationality, because such prejudices are superficial, baseless and untrue. The current translation can promote the quality of Islam-Catholicism ties to a large extent and help hold a more intimate dialogue between Iran and the Vatican.”

The Vatican envoy added, “Dialogue is not held just among religions; rather, it brings the faithful together. Ignorance is the biggest obstacle in the way of holding dialogue, developing mutual understanding and showing mutual respect. This book is helpful in removing the existing obstacles.”

Hojjat-ol-Islam Navvab, for his part, elaborated on the prevailing viewpoints and approaches in the University of Religions and Denominations (URD) and said, “Dialogue, research and postgraduate studies are among the main focuses of the university. […]

“URD is a non-governmental, independent university because changes in different governments can render the university vulnerable; that’s why the university is trying to pursue its activities based on freedom, independence, liberty and freethinking. Our university focuses on dialogue when it comes to religions and attaches enormous significance to proximity as far as denominations go.”

[…] “The University of Religions and Denominations has gone to great lengths to promote [religious] tolerance by adopting different approaches such as translation of various religious books, and it has fared well in this regard.

“In light of the fact that Qom is a religious hub, we decided to base the university in Qom. The impacts of such a decision are evident today. The Society of Religions and Denominations has been set up in Qom, and all seminary schools have begun to offer courses on different religions. What we’ve done has been effective in many ways.

“We have opened dialogue on different fronts; as a result, leaders of different religions and denominations visit the university and talks have been held with many churches; […]”

“Religions must know about each other. This approach has been adopted without any prejudice. At the beginning, we compiled a book on Isma’ilism; leaders of this religious sect hailed it as the first academically-complied book by scholars at Qom Seminary School. The URD has always underscored scientific methods at all stages [of education], and there’s always room for dialogue.

“As many as 250 books on different religions and denominations have been translated so far, and this trend will be actively pursued. The university is also home to a research department which publishes several research journals. […] Six-hundred majors are studying at the doctoral level and 1,500 at the postgraduate level in the university.

“The university is running online courses too. We hope our efforts constitute a step toward removing hatred. We hope we can produce a wave of love and kindness and remain steadfast on this path in defiance of measures by ISIL to breed hatred.

“We hope the university’s small steps can help promote humanity, contribute to the cause of peace and human comfort, and bring religions closer together. We do not get engaged in dialogue just for the sake of dialogue. We enter into dialogue to improve the status of humans and ease their pains.”

Soleimani, one of the three translators of the book, said, “We translated the book because we believe such measures can help rid the world of violence, cynicism and war. I hope Christians too take similar measures to introduce Islam [to their communities].”

Meftah, another translator, led off his speech by highlighting the need for helping dialogue among religions become a reality and said that today the atmosphere of dialogue between religions has domination over the dialectical approaches of the past.

“Undermining each other is not in the best interests of divine faiths; rather, dialogue and mutual understanding are the best option. […]

“[…] When concepts such as miracle, the origin [of the Creation], Akhirah [the afterlife or the Islamic Day of Judgment], the invisible world, etc. are analyzed in the review of the holy book in modern times, Muslim beliefs become subject to critique too. We should not take pleasure when Christian religiosity takes a hit in the Western world, because secularist attitudes and lack of attention to religion could also affect Muslim societies.

“I hope the translated version of the book could be a reason for continuing dialogue between Christians and Muslims; we hope the book could generate motivation to seriously follow scientific topics.

“The dialogue might be challenging to some extent, but it can help us get closer in terms of theological issues. If we can understand each other better, we can hold more satisfactory dialogue.

“Those who compared this book [with its translation] stressed that its terminology should be totally Christian without being mixed with Islamic terms. We did not add our own viewpoints to the text; neither did we make alterations to it.

“It is the first time that the book has been translated in a non-Christian country. The readers may find the first part of the book – which deals with theological theories – boring, but the following parts are a better read.