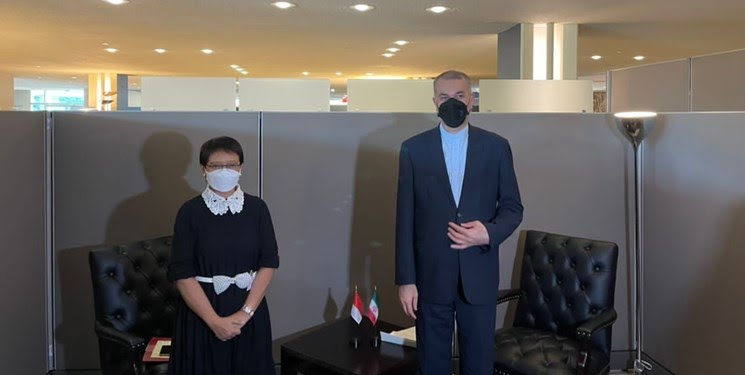 As part of his meetings on the sidelines of the United Nations General Assembly, Iran's Foreign Minister Hossein Amirabdollahian met with Indonesia's Foreign Minister Retno Marsudi on Friday. The two sides exchanged views on bilateral issues and cooperation.

During the meeting, the Indonesian foreign minister said Jakarta attaches importance to maintaining and improving relations with Tehran and expressed readiness to hold a joint commission between the two countries.

Marsudi thanked the Islamic Republic of Iran for exporting pharmaceutical items to Indonesia and announced her country’s readiness to expand trade relations with Iran, including in the field of palm oil exports.

The Indonesian foreign minister also stressed the need to follow up on agreements previously reached between the two countries.

Amirabdollahian, for his part, referred to the seven-decade history of diplomatic relations between Iran and Indonesia, and clarified that the expansion of relations with Asia is one of the main priorities of the new administration in the Islamic Republic of Iran, and that among Asian countries, Indonesia is one of the high priority countries in Iran’s foreign policy.

He also thanked and praised Indonesia for its stances and support for Iran in international organizations.

The Iranian foreign minister mentioned the talks previously held on expanding cooperation in various fields, including health, industry, agriculture and technology. He stressed that Iran is ready to hold a joint commission at the earliest opportunity and also to finalize the preferential trade agreement.

He also noted that it is necessary for the two sides to focus on activating areas such as tourism and public exchanges.

During the meeting, the two sides also discussed the latest developments in Afghanistan.