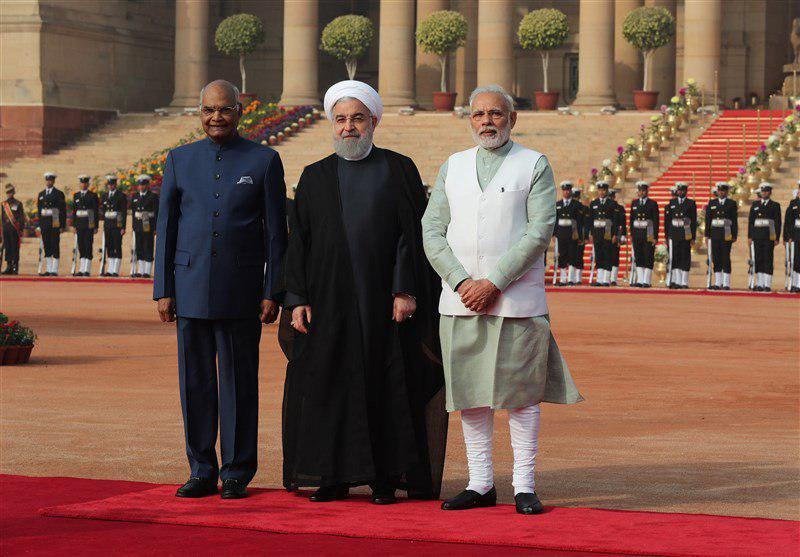 A senior political analyst is sceptical about India’s interest in development of its ties with Iran, saying New Delhi is just after securing the energy supplies it needs and gaining access to the region’s markets via the Islamic Republic.

As Iranian President Hassan Rouhani made a three-day trip to India to further promote Tehran-New Delhi ties, the Persian-language E’temad newspaper has conducted an interview with political analyst Mir-Mahmoud Mousavi to find out more about Iran-India relations and the circumstances surrounding them. The highlights of the interview conducted by Sara Massoumi follow:

Indian Prime Minister Narendra Modi used to be the Chief Minister of Gujarat. His successful economic policies in Gujarat turned him into a high-profile figure among top Indian leaders and become a candidate of the Bharatiya Janata Party (BJP) in the election. This success of Modi’s came as he was on the black list for killing 2,000 Muslims in 2002, and was even banned from travelling to Europe and the United States. He has focused his policies on economic development, which, in turn, is not possible without having broad relations with other countries.

One of the initiatives of Modi is to transfer the material and intellectual assets of Indian expats to India. Over $70 billion is reportedly funneled into India by Indian expats on an annual basis. The BJP led by Modi has arrived at the conclusion that there is on key to the sustenance of India’s development and protection of the party: economic development. Accordingly, Modi seeks to utilize India’s foreign relations to achieve the nation’s economic objectives.

India has not taken its ties with Iran seriously enough, and its view of Iran is not beyond the economic issues. New Delhi has not threatened Iran’s interests so far, but in some cases, its behaviour has not been in line with Tehran’s interests. There is a concern that India would serve as an ally of the US during the implementation of the Iran nuclear deal in the future.

Given the threats that the US believes are posed to it by China, certain countries are pursuing the policy of empowering Indian to counter Beijing. This is true, but it is not a new idea. In the 1990s, some renowned American politicians had raised the question how Asia could be run and growing China be controlled. Since then, opinions have focused on the idea that India could play a key role in that regard. India’s potential in that path is being realized, and New Delhi, too, is taking advantage of that chance smartly.

Economic relations are somehow intertwined with political ties as well. The Western investment in India and the promotion of extensive relations between the West and New Delhi bring with them relations which simply go beyond economic ties to include such domains as security and defense. Of course, historical conflicts in the regions could be an impediment to the implementation of programs and achievement of goals. To settle them, New Delhi needs to forge cooperation with transregional powers. War on terror, establishing security in Afghanistan and resolving the long-running dispute between India and Pakistan are on New Delhi’s agenda. India is seriously pursuing the policy of having relationship with neighbouring countries, and as the Big Brother, has plans to manage the region.

India has not taken its ties with Iran seriously enough, and its view of Iran is not beyond economic issues. New Delhi has not threatened Iran’s interests so far, but in some cases, its behaviour has not been in line with Tehran’s interests. There is a concern that India would serve as an ally of the US during the implementation of the Iran nuclear deal in the future.

Since the illegitimate entity of Israel came into being, it has been surrounded by Muslim countries, and India is Israel’s first Non-Muslim neighbour to the east. Therefore, Israeli Prime Minister Benjamin Netanyahu is seeking to expand Tel Aviv’s relations with New Delhi. On the other hand, India regards terrorism attributed to Islam as one of the most serious threats facing it. Israel shares the same concern. Tel Aviv and New Delhi began working together on fighting terrorism at least two decades ago. In the first step, the two sides implemented plans on exchanging information and news as well as training forces; in later steps, exchange of experience in the field of intelligence and relevant technologies took priority. In the third and current phase, the two sides are running joint ventures to produce military equipment and exchange intelligence and spying devices.

As a member of the Non-Aligned Movement during the Nehru and Gandhi era, India has a long history of defending Palestinians’ rights and is careful not to rapidly distance itself from that strategy and not to cause Palestinians and Arabs’ discontent. On the other hand, India’s Muslim minority contains a considerable number of people, around 200 million.

India is hungry for energy. Although the importance of West Asia as an oil hub has diminished over the past 20 years, still it is one of the most significant sources of energy in the world. Given that economic development is top of the policies of the Modi administration, meeting the country’s energy demands is one of the pillars of that approach. So, India should be present in the region to secure the energy supplies it needs.

As for Tehran-Riyadh divisions, India has not get involved in the dispute. The country has maintained its cordial relations with Saudi Arabia to be able to use the kingdom’s energy and other assets. On the other hand, India has enhanced its age-old relations with Iran. India attaches great importance to Iran’s energy and good economic market. However, India’s differences with Pakistan is a serious issue for New Delhi. Iran and Saudi Arabia have what it takes to tip the balance in favour of Pakistan, so New Delhi has but to have good relations with Tehran and Riyadh.

In order to operate in Asia, the country needs to have political and security programs. Given that the West has also become active and China’s status has been strengthened, Iran needs an overarching plan to delineate a road map for Tehran’s policies in Asia. Iran and India have good potential for cooperation.