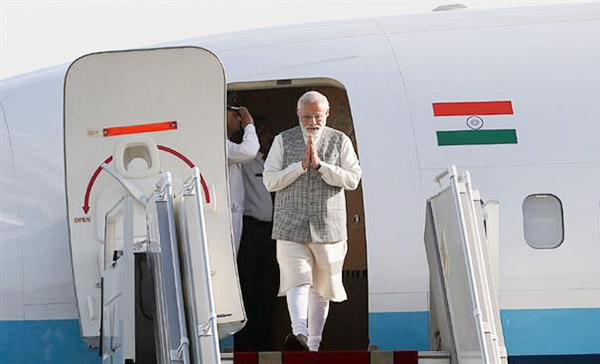 Indian Prime Minister Narendra Modi arrived in the Iranian capital Tehran at the head of a large delegation to boost economic and political ties with Tehran.

Modi landed in Tehran on Sunday for a two-day visit with Iranian officials. He was welcomed by Iran’s Economy Minister Ali Tayebnia at Tehran’s Mehrabad Airport.

He is expected to meet Iranian President Hassan Rouhani on Monday morning. The two heads of state will discuss the enhancement of trade, economic, cultural and political cooperation.

During Modi’s stay, Iran and India are set to sign 14 cooperation agreements, including an agreement to develop the southern Iranian port of Chabahar, which lies in the Gulf of Oman.

Modi, who is on his first official visit to Iran, will also meet with the Leader of the Islamic Revolution, Ayatollah Seyyed Ali Khamenei.

Meantime, Afghan President Ashraf Ghani will travel to Tehran to join Rouhani and Modi for the signature of the agreement on Chabahar Port.

In May 2014, India and Iran signed an MoU to jointly develop the port once the international sanctions against Iran were lifted. Iran received sanctions relief after its nuclear deal with six world powers took effect in January this year.

The Chabahar route will allow Indian goods to reach Afghanistan via the Iranian port of without crossing Pakistan’s territory.

Chabahar is located in the Gulf of Oman on the border with Pakistan. It is Iran’s closest and best access point to the Indian Ocean and Iran has devised serious plans to turn it into a transit hub for immediate access to markets in the northern part of the Indian Ocean and Central Asia.