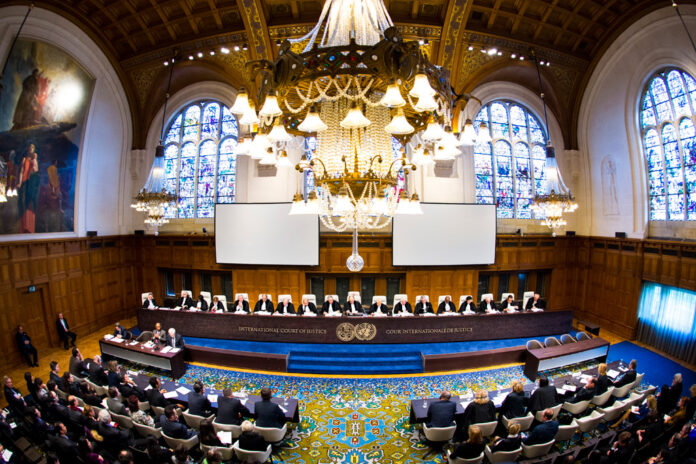 Iran’s foreign ministry spokesman says the International Court of Justice (ICJ) in the Hague has announced that it has jurisdiction over a case on violations of the 1955 Treaty of Friendship, Cooperation and Mutual Assistance, rejecting all the US objections in this regard.

In a statement on Wednesday, Saeed Khatibzadeh said legal proceedings will be launched into the case based on the ICJ ruling.

“Today at 3 pm the Hague local time, the International Court of Justice announced it has jurisdiction to look into the case on breaches of the 1955 Treaty of Friendship [Cooperation and Mutual Assistance],” he said.

“Based on conclusive evidence and documents as well as the documented statements of defence presented to the court by the Islamic Republic of Iran’s legal team in cooperation with the Centre for International Legal Affairs, the Ministry of Foreign Affairs and other lawyers and counsellors, the court rejected the initial objections by the US and announced it is competent to review the lawsuit filed against the US government,” Khatibzadeh said.

“Accordingly, substantive proceedings will be launched into the case,” he explained.

“With the issuance of this ruling (ICJ announcing it is competent to review the case), Iran secured its second legal success during the proceedings into the case,” he said.

“Its subject concerns the United States’ reimposition and tightening of inhumane sanctions against our country since May 8, 2018,” Khatibzadeh noted.

“Earlier on October 3, 2018, the ICJ issued an injunction in favour of Iran, obliging the US to remove whatever impediments caused by sanctions in the domains of medicine and medical equipment, foodstuffs and agricultural produce, and parts and services related to civil aviation safety,” he explained.

“However, in line with their ‘maximum pressure’ policy and economic war against the Iranian government and nation, the Americans have refused to abide by the ICJ’s verdict so far,” he said.

Khatibzadeh underscored that Iran has duly informed the International Court of Justice of the necessity of compliance with the injunction and Washington’s violation of it.

Now, he noted, with the court announcing its jurisdiction over the case, an opportunity has emerged for the court to also look into the United States’ refusal to abide by the injuction while the court is moving forward with substantive proceedings into the case.

“Although the ruling issued today pertains to the court’s competence to look into the case, it indicates Iran’s demands are rightful at this stage of the proceedings, and with this success, the final phase of proceedings, i.e., substantive proceedings will be launched into the case,” he said.

“Using international mechanisms is part of the policy of the Islamic Republic of Iran’s government and Ministry of Foreign Affairs to secure the rights of Iranian people on the international stage, which has always been on the agenda of this ministry,” he added.