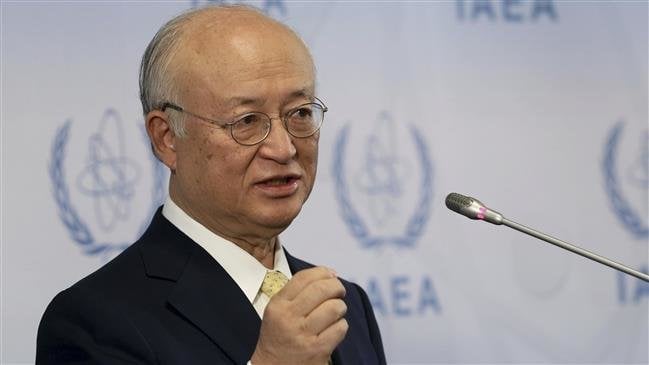 The International Atomic Energy Agency (IAEA) has declined to "take at face value" a recent Israel's claim that Iran has a secret atomic warehouse.

“The Agency uses all safeguards relevant information available to it but it does not take any information at face value,” IAEA Director General Yukiya Amano said in a statement released on Tuesday.

Although Amano did not make an explicit reference to Israeli Prime Minister Benjamin Netanyahu’s claim against Iran but it is his first public pronouncement since the premier’s speech.

“It should be noted that under the existing verification framework, the Agency sends inspectors to sites and locations only when needed,” he added.

During his speech on Thursday at the 73rd annual session of the UN General Assembly in New York, Netanyahu once again took the stage to bring out fresh theatrics against Iran, repeating his threadbare allegation that the country is working to develop nuclear weapons at a “secret” site and urged the IAEA to inspect it.

Amano further emphasized that the IAEA’s work related to nuclear verification “must always be impartial, factual, and professional,” saying, “In order to maintain credibility, the Agency’s independence in relation to the implementation of verification activities is of paramount importance.”

The IAEA chief added that the agency is conducting verification and monitoring of Iran’s nuclear-related commitments under the 2015 nuclear agreement, officially known as the Joint Comprehensive Plan of Action (JCPOA), Iran signed with major world powers.

“These activities will continue to be carried out within the parameters of the relevant decisions and resolutions of the IAEA Board of Governors and the UN Security Council as appropriate,” he pointed out.

Pointing to his reports to the IAEA Board of Governors, Amano noted that the agency would continue its evaluations regarding the absence of “undeclared nuclear material and activities for Iran.”

In his introductory statement to the Board of Governors in Vienna on September 10, Amano said Iran is living up to all its commitments under the 2015 nuclear deal.

He added that the IAEA would continue to verify the non-diversion of nuclear material declared by Iran under its Safeguards Agreement.

Later in his opening address to the IAEA’s 62nd General Conference in Vienna on September 17, the IAEA director general reaffirmed that Iran is in compliance with the nuclear agreement.