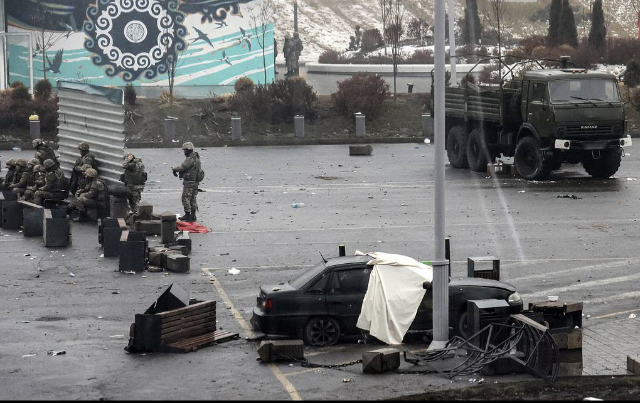 Speaking of the events in Kazakhstan, Russian President Vladimir Putin emphasized that Moscow will not allow the “color revolutions” to take place on its doorstep.

‘Maidan methods’ have been resorted to in Kazakhstan, with the country facing a genuine threat to Its statethood, Putin has stated at a video conference of the heads of the Collective Security Treaty Organization (CSTO) on Monday.

He warned that what started as peaceful protests against higher gas prices and quickly escalated into violent riots and acts of terrorism was not the first and would not be the last attempt to meddle in the region from abroad.

Stating that the President of Kazakhstan had turned to the members of the CSTO for help in the face of an “unprecedented challenge to its security, integrity and sovereignty”, Putin added that the threat was caused not by spontaneous protests over fuel prices, but by the fact that “destructive internal and external forces had taken advantage of the situation”.

With that in mind, Putin underscored the need for the CSTO to develop measures jointly with to counter terrorism and protect security.

Mass demonstrations in Kazakhstan began earlier in the week as residents of Zhanaozen and Aktau opposed a two-fold hike in prices for liquefied petroleum gas. The originally peaceful protests subsequently spread to other cities, spiralling into violent clashes with the police, looting and vandalism. President Kassym-Jomart Tokayev declared a state of emergency until 19 January, inviting the CTO peacekeeping forces to help bring the situation under control.

After an appeal by the President of Kazakhstan, the CSTO forces “in a matter of hours” succeeded in preventing any undermining of foundations of state power in Kazakhstan, the complete degradation of the internal situation by “terrorists, criminals and marauders”, noted Putin.

The Russian President applauded the high level of mutual trust, cooperation and readiness to swiftly spring to action demonstrated by CSTO colleagues.

Forces of the Collective Security Treaty Organization would remain in the country as long as needed, underlined Putin.

“A contingent of collective peacekeeping forces of the CSTO has been sent to Kazakhstan and, I want to emphasize this, for a limited period of time, for as long as the president of Kazakhstan, the head of state, … finds possible to use it,” he said at the extraordinary session of the CSTO Collective Security Council.

Putin also proposed that on the basis of the CSTO further measures be developed to jointly counter such attempts at destructive external interference in the area. He accentuated that CTSO should never be blindsided by tragic events of the kind witnessed by Kazakhstan, and member-states ought to be “fully mobilized and ready to rebuff any provocations”.

Tokayev also told the extraordinary online meeting of heads of the CSTO that the main goal of the terrorists was undermining constitutional order, the seizure of power and an attempted coup.

“A hot phase unfolded and groups of armed militants who were waiting in the wings came into action. The main goal became obvious – the undermining of the constitutional order, the destruction of governance institutions, the seizure of power. We are talking about an attempted coup,” Tokayev said.

He added that foreign militants had participated in aggression against Kazakhstan.

According to Tokayev, the situation was critical, Almaty and 9 regional centres were held by terrorists.

The Kazakh president described the unrest as the most difficult in the entire history of the country since its independence and suggested that the violent riots were coordinated from one center.

Militants pretended to be participants of mass protests and used demonstrators as human shields, Tokayev continued, mentioning that foreigners participated in the aggression against Kazakhstan.

Tokayev also thanked the CSTO leaders for their assistance and for agreeing to send peacekeeprs to Kazakshtan to protect critical infrastructure.

“Kazakhstan turned to the CSTO with a request to provide assistance, it turned out to be extremely timely. After finding out about the arrival of three military transport aircraft in the capital, the militants abandoned their plans to seize the presidential residence,” Tokayev said, adding that the large-scale counter-terrorism operation will end soon.

According to the Kazakh leader, the recent events “became a turning point in the development of the organisation [CSTO].”

The CSTO mission will end when the counter-terrorism operation is completed, Tokayev noted, mentioning that a total of 2,300 peacekeeprs are currently deployed in Kazakhstan.

“We already see that questions are arising about the legitimacy of the deployment of the CSTO forces. This is due to the lack of reliable information and misunderstanding of the whole situation,” Tokayev continued.

The State Secretary of the Republic of Kazakhstan, Erlan Karin, has said that the unrest in Kazakhstan was a “hybrid terrorist” attack carried out with the participation of both internal and external forces and aimed at overthrowing the government.

“We are faced with a hybrid terrorist attack on Kazakhstan with the aim of destabilization and coup,” Karin stated on the Khabar 24 TV channel on Monday.

He added that there was a “conspiracy” of both internal and external forces and that apart from terrorist groups, information attacks were also used.

“There is a certain conspiracy of internal and certain external forces, since the participants of the, let’s say, terrorist strike groups, were both Kazakh citizens and foreign citizens,” Karin continued.

The state secretary noted that it is not correct to describe the events in Kazakhstan as an attempt to carry out a color or velvet revolution, since such scenarios would be ineffective in Kazakhstan given the specific circumstances in the country.

“Our country has held out. The president’s decisive actions thwarted plans for destabilization, including his decision to invite the CSTO peacekeeping contingent. There was a very critical situation …so it was necessary to take tough, decisive actions …The involvement of the CSTO forces thwarted all the plans of destabilization. Thanks to the efforts of the peacekeeping contingent, it was possible to concentrate our forces on conducting a direct counter-terrorist operation … this made it possible to protect state integrity,” Karin stated.

Two extremist cells, whose members took part in the mass riots in Kazakhstan, have been neutralized in the city of Almaty, the country’s National Security Committee informed on early Monday.

“The National Security Committee of the Republic of Kazakhstan is implementing measures to search for and detain participants in mass riots and acts of terrorism, as well as to clarify the circumstances of the crimes committed. As a result, two extremist cells have been neutralized on the territory of the city of Almaty, whose members took an active part in the riots in the megalopolis on January 4-8, 2022,” the committee announced in a statement.

According to the release, four members of the same extremist cell were arrested on Sunday and firearms, traumatic and stun grenades, as well as other material evidence, were seized from them.

“The leader of another group, a foreign citizen, actively participated in the riots and had connections with terrorist groups abroad. According to the investigation, he purposefully arrived in Kazakhstan to prepare massive illegal actions and attacks on government bodies and security forces. A search for his accomplices has been organized,” the committee added.