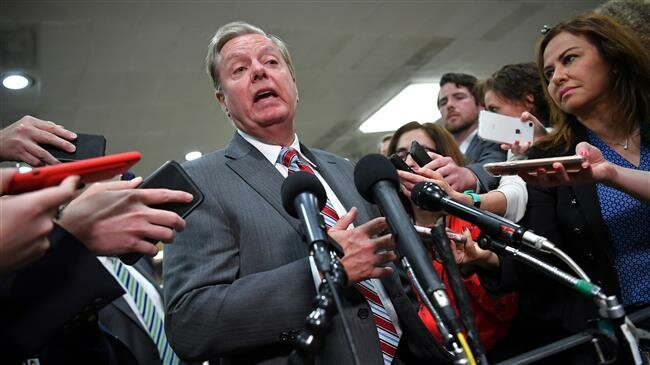 “It is now time for the US to put on the table an attack on Iranian oil refineries if they continue their provocations or increase nuclear enrichment,” said the veteran Republican lawmaker from South Carolina on Twitter Saturday.

“Iran will not stop their misbehavior until the consequences become more real, like attacking their refineries, which will break the regime’s back,” added the fervently pro-Israel Senator, who sits on the Senate foreign Relations Committee and has established himself as a leading detractor against the Islamic Republic.

Back in June, Graham also blurted provocative rhetorical attack against Tehran following Iran’s shot down of a US spy drone that intruded into Iranian territorial waters in the Persian Gulf, threatening that the Islamic Republic should prepare for “severe pain.”

It is customary of US lawmakers financed by the powerful pro-Israel lobby groups in the country to harshly criticize Iran or sponsor legislative measures against the Islamic Republic to prove their loyalty to the regime occupying Palestine.

In the aftermath of Iran’s shot down of the US surveillance drone, US President Donald Trump claimed that he withdrew an order to strike Iran in the last minute citing potential of the resulting loss of lives. Iranian authorities, however, had warned that any US strike against the country would be severely retaliated.

The warmongering rhetoric by Graham, who is closely allied with Trump, is nothing new. Last June, he also suggested that the United States should take military action against Venezuelan President Nicolas Maduro so countries opposing the US would be intimidated and surrender to Washington’s demands.

To handle foreign conflicts “we need points on the board,” said Graham during an interview with right-wing broadcaster Fox News, further insisting that Washington needed to resolve its issues with other countries using military force.

“Do what Reagan did in Grenada. Put military force on the table … start with your own backyard,” he underlined.

Also in July, the Republican senator even threatened Washington’s Western allies, saying that the US should sanction “to the ground” European countries that continue to trade with Iran under the 2015 nuclear deal and refuse to join America’s pressure campaign against the Islamic Republic.

Speaking to Fox News, Graham further said the European signatories of the Joint Comprehensive Plan of Action (JCPOA) – the UK, France and Germany – were too “weak” too abide by America’s unilateral sanctions against Tehran.

“I will tell the Europeans, ‘If you want to side with the Iranians, be my guest, but you won’t use an American bank or do business with the American economy,'” he added.

The remarks came days after Tehran announced it was beginning to cut back on its commitments under the nuclear deal in response to the Europe’s inability to protect bilateral trade from US sanctions.

The US-backed Saudi air campaign against neighboring Yemen has so far killed thousands of civilians, caused millions to leave or lose their homes, and sparked widespread starvation.

The Yemeni army and volunteer forces led by the country’s popular Houthi movement have attacked refineries in Saudi Arabia in the past in efforts to strike at the despotic regime’s major economic sectors. Saturday’s drone strike, however, hit target that were about 500 miles deep into the Saudi territory and was one of the largest operations the Yemeni forces have launched so far.