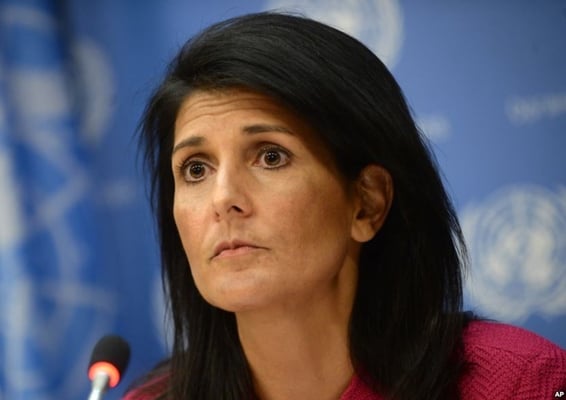 Permanent Representative of Iran to the United Nations says the US envoy to the UN thought she could change the agenda of a multilateral organisation, but practically her efforts resulted in nothing but more isolation for Washington.

Gholamali Khoshroo made the comments in reaction to the resignation of US Ambassador to the United Nations Nikki Haley.

She entered the UN with a unilateralist viewpoint thinking that she is a new sheriff and the UN is a barracks or prison, Khoshroo noted.

The Iranian diplomat said that the United Nations is formed based on the sovereignty of states, but Haley wanted these independent states to work under her command.

“Washington was completely isolated on important issues such as the Palestinian issue and the Zionist regime, and the case of Iran which was a priority for the United States,” he went on to say.

“We also saw the United Nations Security Council’s meeting that was chaired by the US was Washington’s biggest historic mistake because all countries spoke against the United States and the session ended without any result. The September 26 session of the Security Council led to the isolation of the US in the world more than ever,” underscored Khoshroo.

With regard to the Palestinian issue, despite all the unilateral support for Israel, they failed to gain any support from the United Nations for their actions in favour of Tel Aviv, he stated.

He further mentioned that the resolution which Haley offered to the Security Council received only one aye vote, and that was her own vote.

“It was very rare in the history of the Security Council that a permanent member of the Council introduces a resolution and becomes so much isolated in the eyes of the world states.”

“She entered a multi-party organisation with a unilateralist perspective, and practically was defeated by multilateral processes,” he added.

Elsewhere in his remarks, he expressed hope that Washington would return to multilateral policies by learning lessons from this mistake, and by avoiding unilateral actions that only existed in the pre-modern world.

He called on the US government to stop discrimination, pressure and imposing sanctions against other countries adding that “Basically, these US policies are against global policies.”

“Whenever, the United States wants to stand against the international will in all areas, such as law, international issues, and environment matters, it fails and gets more isolated.”

“Whoever pursuing such policies would meet the same fate. Haley thought she could change the agenda of the United Nations. She thought the US can manage the international community in its own way because it has the power. However, this view was very dangerous, and practically failed.”

Nikki Haley was one of the proponents of such policies, which fortunately failed, and the end of her mandate coincided with more isolation for the United States, stressed the Iranian diplomat.

Nikki Haley resigned as the US ambassador to the United Nations on Tuesday and will leave her post in January. US President Donald Trump accepted the resignation saying that he had been informed about Haley’s decision “probably six months ago.”

Asked about Haley’s successor, Trump said there were a number of people that would very much like to do it and he will introduce her successor in two or three week.

Since the former businessman entered the Oval Office, the list of departures from his administration has been rising rapidly. Some have been dismissed and some have resigned.