Grand Ayatollah: National flag must be the only flag raised across Iraq 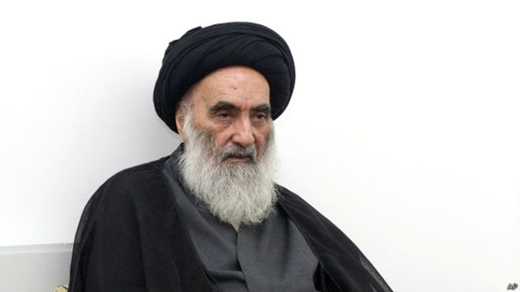 The senior Iraqi cleric urges the government to accelerate efforts to take back the cities fallen into the hands of ISIL terrorists.

The senior cleric made the appeal in a recent meeting with Prime Minister Haider al-Abadi and Vice-President Nouri al-Maliki which focused on security situation in Iraq.

Ettela’at daily published the Ayatollah’s remarks on April 12. The following is a partial translation of what the top cleric said in the meeting:

The Grand Ayatollah asked the government not to release his images and those of other religious figures in the areas recaptured from terrorist groups, saying that the Iraqi national flag should be the only flag which is hoisted in different parts of the country.

Ayatollah Sistani also called for efforts to speed up the liberation of Iraqi cities from the hands of ISIL terrorists, saying that unwavering support should be lent to security forces and volunteer troops in the country.

The meeting also debated the question of Iraqi refugees and the ways to address their problems.

Afterward, the Iraqi premier said that the Grand Ayatollah stressed in the meeting that the country’s volunteer forces should be supervised and fully controlled by the government.