Iran’s Foreign Minister Mohammad Javad Zarif slammed regional and world powers for interfering in other nations’ domestic affairs, saying such interventions have only exacerbated the current crises in the Middle East.

Speaking in a Sunday meeting with Algerian Foreign Minister Abdelkader Messahel in Algiers, Zarif cited terrorism as the main problem of the Middle East and said establishing democracy was the only way to overcome the problem.

“Each nation must establish its own democracy,” he said, adding the main priority of all regional states must be fighting extremism.

“We should avoid imposing solutions on other nations. We are not allowed to decide for other nations,” Zarif said.

The Iranian top diplomat also emphasised that no state is allowed to interfere in other nations’ internal affairs.

“We should only help other nations to find their own solutions. Foreign intervention is the main reason behind the prolonging of the regional crises,” he noted.

According to Zarif, the extremists and the Zionists are the two main groups that take advantage of the chaotic situation in the region.

“Iran will never become a tool in the hands of these enemies to press ahead their plots,” he added.

Elsewhere in his statements, Zarif also touched upon the recent diplomatic crisis between Saudi Arabia and Qatar and said Tehran is monitoring the current situation with deep concerns.

“We believe that negotiation is the best solution to the current problem. We are ready to do whatever we can to help the conflicting sides to get out of the crisis,” he said.

For his part, the Algerian foreign minister endorsed Zarif’s view on removing regional crises, saying negotiation is the only way to remove regional problems.

“Respecting other states’ sovereignty is among our top priorities. We have our own independent policies in various fields including in fight against terror. Algeria itself is a victim of terrorism. We lost over 200,000 of our citizens in terrorist violence over the past years. Algeria has considerable experience in fight against terror,” he said.

The Algerian top diplomat also said the Arab world has always been suffering from internal divisions, adding one of these divisions is conflicting views to the war in Syria.

“The division can be resolved if the Arab states respect each other’s sovereignty as well as their own people’s rights. In Libya, we saw how foreign meddling led to the current crisis in the country. The crises in Syria, Libya and Yemen can be resolved soon if there is no foreign interference. We hope the crises in the Arab world could come to an end through dialogue,” he said.

Iranian foreign minister arrived in Algeria on Sunday at the first leg of his regional tour which will later take him to Mauritania and Tunisia as well.

Earlier, Foreign Ministry Spokesperson Bahram Qassemi said the visits are aimed at boosting mutual relations and expanding the ties between Iran and the African countries, as well as discussing the developments of the region, including Syria and the Persian Gulf. 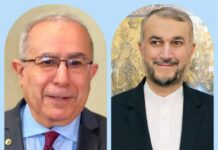