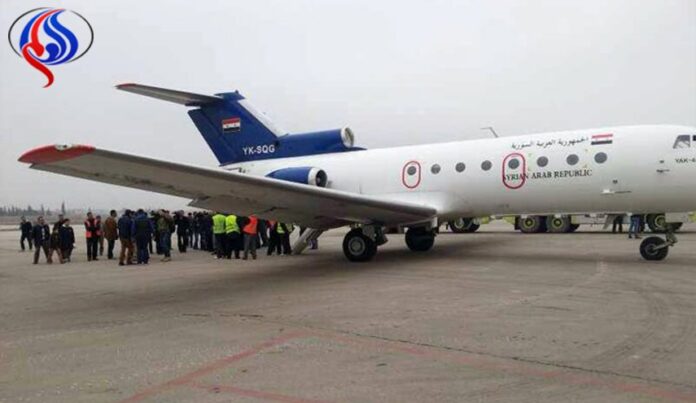 A first airplane has taken off from the international airport in the Syrian city of Aleppo in four years, during which the airport was closed due to the militancy in the Arab country.

The flight by a government airplane on Friday was a trial attempt in preparation for the total reopening of Syria’s second largest airport in the near future.

Government sources said the Aleppo International Airport was likely to reopen to the public by February but cautioned that things will be contingent on the military situation in the province of the same name.

If the airport in Aleppo resumes work, Syria will have at least four functioning airports open to the public. Authorities started rehabilitating Aleppo’s airport a few days after the city was fully liberated from Takfiri terrorists in late December 2016, according to Press TV.

Aleppo’s liberation is seen as a crushing blow to the militants and their foreign supporters, who have been actively working to topple the Damascus government since March 2011.

Separately, six Syrian civilians were killed in Turkish airstrikes on Syria’s northwestern city of al-Bab. Turkey has been conducting unauthorized sorties over Syria to target Kurdish militants, whom it considers enemies of the Turkish state.

Meanwhile, Syrian military forces have launched an operation to recapture 11 villages from Takfiri terrorists in the Wadi Barada Valley, where springs and water facilities providing water for millions in the capital city are located.

Water supplies from the militant-held area of Wadi Barada near Damascus have been cut since December 22, when Syrian army soldiers and fighters from popular defense groups launched a major offensive to recapture the mountainous area near the Lebanese border.

The Takfiri militants had also earlier contaminated Damascus’ drinking water supply with diesel. The city’s water authority had to cut supplies to Damascus and resort to using water reserves over the act of sabotage, which saw extremists polluting the Ain al-Fijah spring in Wadi Barada.

On Friday, the United Nations Children’s Fund (UNICEF) expressed concern about the risk of waterborne diseases among children in Damascus.

The head of the UN-backed humanitarian taskforce for Syria, Jan Egeland, told reporters in the Swiss city of Geneva on Thursday that just in December 2016 “5.5 million people have had their water supplies cut or minimized.”

He stressed that “to sabotage and deny water is of course a war crime,” warning that civilians “will be affected by waterborne diseases” if clean water is not supplied to them.

On Friday, the Syrian national reconciliation minister, Ali Haidar, said the country is prepared for an “open war” against the foreign-backed militants in the northern city of Idlib.

Idlib, which is currently considered the biggest remaining militant stronghold in Syria, has become home to thousands of Takfiri terrorists evacuated from key areas under reconciliation agreements with the government.

Haidar said Syria would not allow Idlib to remain under militant control indefinitely unless there was an international deal to resolve the situation.

Over the past almost six years, Syria has been fighting foreign-sponsored militancy. UN Special Envoy for Syria Staffan de Mistura estimated in August that more than 400,000 people had been killed in the Syrian crisis until then. The UN has stopped its official casualty count in Syria, citing its inability to verify the figures it receives from various sources.