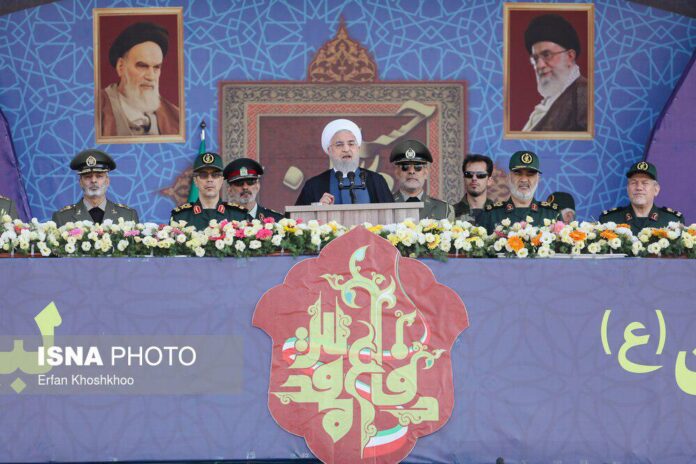 The Iranian president says the enemy will not dare launch aggression against the Islamic Republic thanks to the power of the Iranian Armed Forces and nation.

Hassan Rouhani further said Iran will not succumb to the enemy, will defend itself and will not allow others to encroach upon its frontiers.

“The United States and the Israeli regime want to see discord among peoples in the Middle East region,” said the president at a parade of Armed Forces in the Iranian Capital, Tehran, marking the anniversary of the start of the Iran-Iraq war in the 1980s.

“Hegemonic powers led by the United States have always pursued the objective of creating insecurity, misery and problems, and looting the interests of the regional countries,” he said.

He said Iran attaches great significance to security in the Persian Gulf and the Strait of Hormuz.

“We announce to the world that the presence of foreign forces is problematic for international waterways as well as shipping, oil and energy security,” he said.

“However, he noted, the Islamic Republic of Iran’s path is one of unity and coordination with regional countries,” said President Rouhani.

“We extend a hand of friendship to all our neighbours and forgive their past mistakes,” President Rouhani said.

He noted enemies made numerous efforts in the years following the 1979 Islamic Revolution of Iran to create insecurity, hatch plots to disintegrate the country, and assassinate top Iranian officials.

“Enemies of the Revolution and the Iranian nation even didn’t settle for these acts, and conspired to undermine our security and defence foundations,” he added.

“The enemies’ first plot was to dissolve the Army, which was promoted by … mercenaries,” he said.

He then touched upon the 8-year Iraqi imposed war on Iran in the 1980s, which, he said, had Washington’s green light. He said the Iranian nation and military stood up to aggressors through unity and solidarity.

He further touched upon accusations levelled by the enemies against Iran.

“[The lies of] Those who want to attribute regional incidents to the Islamic Republic of Iran will be unmasked like all of their other lies which were exposed,” he said.

“If they are really after peace and security, they should not send so much dangerous weapons to the region and not turn our region into an arms depot and [a place for] an arms race, and if they really want security for this region they should distance themselves from the region because the presence of all of them has amounted to hardship and disaster for the region,” said the president.