Deputy minister tells colleagues to quit if they can’t manage 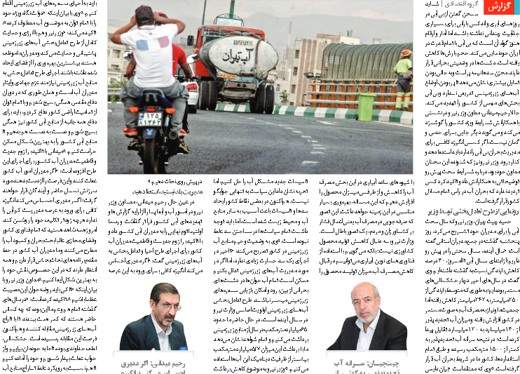 Giving an ultimatum to managers, the deputy energy minister warned that if they are not motivated enough to contribute to water management, they’d better step down.

On February 21, Etemad daily ran a report on water crisis in Iran and the need for urgent action to defuse it. What appears below is a partial translation of what the energy minister and his deputy have said about the country’s water resources:

“We will have a tough year ahead [starting on March 21]. Over the past 11 months there has been a 30 percent drop in rainfall,” said Energy Minister Hamid Chitchian.

Deputy Energy Minister for Water and Sewage Affairs Rahim Meydani urged officials who play a role in water management across the country to try in earnest to implement the plan aimed at reviving ground water resources.

He underscored that implementation of the plan requires determination and said, “As we joined hands during the Sacred Defense to safeguard our territorial integrity, we should now spring into action to properly protect the country’s water resources.”

Meydani warned, “If those at the helm of water management failed to seize the opportunity, they would be blamed by present and future generations. If a manager thinks that they are not motivated enough to step up to the plate in dealing with water crisis, they should let us know as soon as possible.”

He further said, “Drought has turned out to be a blessing in disguise. In fact it was a wake-up call; it has prodded us to take action to compensate for overconsumption of water and properly manage surface and ground water resources in the face of crises.”